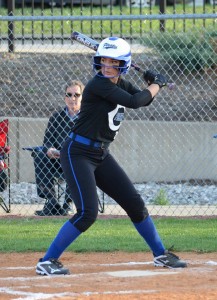 The Mid-Southern Conference Softball race, although early in the season, is just that, a race.  Coming into Tuesday’s game at Silver Creek, Charlestown… along with North Harrison, Salem, and Silver Creek were sharing an undefeated conference start, with Brownstown one game back and in the mix.  The Lady Pirates, along with the rest of the Mid-Southern Conference Softball programs; know that every single conference game is critical.  Tuesday evening, the Charlestown Lady Pirates did what they had to do; beat arch-rival Silver Creek and keep themselves in a position to vie for defending their 2015 title.  Scoreless after three complete innings, Charlestown scored one in the fourth and three in the sixth to lead the hosts 4-0 going to the bottom of the sixth.  The Dragons got on the board in the bottom of the sixth, scoring two runs heading in to the seventh (4-2); when Senior Leah Sherrill basically put the game away for Charlestown.  Despite  Creek showing signs of a rally, and Charlestown clinging to a two run lead with two outs; Sherrill smacked her third homer of the season at a perfect time.  Sherrill finished the game 3-for-4 from the plate, including a triple and three RBIs.  Silver Creek was held to one run in the bottom of the seventh to make it a 6-3 final score.  Carly Price got the seven inning win from the circle, allowing three runs on just five hits, and striking out five.  Lady Pirate MacKenzie Smith went 2-for-4 and scored three times and Brooke Adams finished 2-for-3.  Charlestown improved their record to 6-3 & 3-0 MSC, while the Dragons fell to 3-1 in MSC play.  The Lady Pirates will be back in action on Thursday, hosting MSC rival Clarksville at 5:00 pm.  Charlestown will host North Harrison May 3rd, host Brownstown on May 5th, and travel to Salem on May 9th.