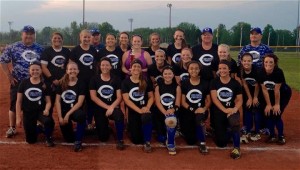 The Charlestown Lady Pirate Softball team moved 15-4 on the season after competing in the Edgewood Invitational Tourney on Saturday.  The Lady Pirates defeated Bedford-North Lawrence 10-3 in the tourney opener, then dispatched Monrovia 7-2 to earn a showdown with Class 3A #2 Edgewood.  Charlestown used 17 hits against the Lady Mustangs (16-4) and spot-on Carly Price pitching to upset the hosts 8-2.  Price, a Junior, pitched the complete game, striking out six Lady Mustang batters.  Price was also dominating at the plate, finishing 4 for 4 with a Double.  Carly was named the Coyle Chevy, GMC, Buick and Coyle Nissan Player of the Game by CPPSB.  Edgewood garnered nine hits, however the Lady Pirate Defense allowed one run, a sole home run in the top of the seventh.  Charlestown scored one run in the first, three runs in the third, and four runs in the fifth to out-pace the host Lady Mustangs; while committing just one error.  Junior Leah Sherrill remained hot at the plate, finishing 3 for 3 including a Double and two runs.  Sophomore Mackenzie Smith got the Lady Pirates rocking in the bottom of the first with a triple to left field and finished 3 for 4, and a run.  Junior Bethany Hall added  2 for 4 batting at the plate; plus batted in four runs; while Junior Sarah Willinger finished 2 for 4 for the winning cause.  Sophomore Kendall Cline got the win pitching the Monrovia game, and Price got the win in the circle for the Bedford-North Lawerence game.  “Proud of the girls, they have really rose up and put together hits when we needed them”, commented Lady Pirate Head Coach Kevin Zollman.  Next up for the Lady Pirates, winners of their last eleven, is Monday hosting the league leading Salem Lady Lions in a critical MSC showdown.  If you absolutely can’t make it to the game, Pirate Pride Sports will Broadcast the game live beginning at 4:45 pm.  Congratulations to the Charlestown Lady Pirate Softball team, 2015 Edgewood Invitational Champions.