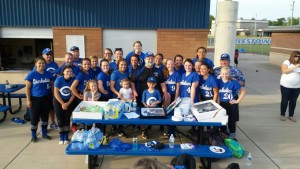 “A picture is worth a thousand words”, as the ole saying goes; and so did the Lady Pirate Softball Senior Night.  If you weren’t there, whether a fan of the sport or not, if your a Pirate at HEART….you missed a milestone memory.  Even PPSB’s audio broadcast couldn’t do it justice….you just had to have been there.  The 2015 Lady Pirate Softball team is one close group; the evidence is their ‘family’ photo after thumping visiting Brown County Friday evening, 16-1 to finish a 21-4 regular season.  Don’t miss Coach with cake on his face in the photo.  The Lady Pirates celebrated their three Seniors, Shelby Goedeker, Kaitlynn Henning, & Alex Hutchinson; they honored their retiring Head Coach, and then they celebrated his birthday.  There was family everywhere and Pirate love was in the air all night.  The Lady Pirate Softball family has done alot of winning, especially over the last four years; evidence is the three Seniors’ record playing softball at Charlestown High School, 81 wins and only 25 loses in four years (70%).  The Lady Pirates, with his family, celebrated the coaching career and dedication of retiring Lady Pirate Softball Skipper, Kevin Zollman (179-145).  It was emotional to say the least, but it was the kind of “emotional” that made you proud to be a Pirate.  Then they whooped up on the Lady Eagles, the game just landed on the wrong night for the visitors this season.

After a scoreless first, Charlestown scored three in the second when Junior Bethany Hall led off with a double to left field, Freshman Erin Kimbrell, Junior Brooke Adams, Sophomore Mackenzie Smith, and Junior Leah Sherrill then added singles.  Charlestown added another run in the third when Senior Alex Hutchinson plated Hall on a single to left center.  Lady Pirates 4-0 over Brown County after three complete.  Then the emotions of the night kicked it as the Lady Pirates scored twelve in the bottom of the fourth, off ten hits, to put the game out of reach for the visiting Lady Eagles.

Junior Leah Sherrill was phenomenal from the plate again, finishing a perfect four for four with three singles and a triple in the fourth that scored three runs.  Sherrill finished the game with four RBIs.  Hall finished 3 of 4 from the plate with two singles, a double and two RBIs.  Kimbrell also added a 3 of 4 performance, all singles; and Junior Carly Price tacked on a double, a single and three RBI’s to her +500 average.

Coach Zollman and the Lady Pirates will now defend their two consecutive Sectional titles beginning Monday at Salem High School.  Charlestown will play North Harrison, as the home team, in the first round of tournament play (5:30 pm).  Pirate Pride Sports will broadcast the game live beginning at 5:00 pm on www.CPPSB.com.