Lady Pirates’ Season Comes to an End in Semi-Final 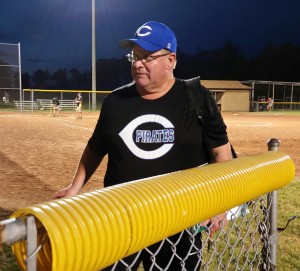 The Lady Pirates have nothing to regret, finishing Mid-Southern Conference Champs, one game out of another chance to defend their Sectional title; but it just wasn’t meant to be this season.  Charlestown Lady Pirate Softball finished the season with a 22-5 record and won 18 of their last 19 games; proving to me the hottest team entering Sectional play.  Top it all off, long time Head Coach Kevin Zollman announced his end of season retirement in mid-May, compiling a career record of 180-146.  Charlestown defeated North Harrison in their sectional opener 3-0, but it was the second match up of the season with Salem that didn’t go as it did during the regular season, a 4-3 win.  The Lady Pirates fell to Salem in the Sectional Semi-Final Tuesday evening in Salem; provoking lots of tears in the finale.  Pirate nation would be hard pressed to find a former player of Coach Zollman who didn’t share a special softball relationship while at Charlestown; this team was no different.  Junior Carly Price, Tuesday’s starting pitcher, ended her season 18-3 from the circle and was recognized as Player of the Game once again for her pure skills at the pitching position.  Charlestown didn’t manage to score a run and stranded eleven base-runners throughout; but through their departure from the field, held to their class act reputation, despite battling many injuries.   Sophomore Kendall Cline finished the game three for three from the plate while Price added a three singles during her four at bats.  Sophomore Taylor Glover added two singles during three trips to the plate.  Charlestown will miss its softball Seniors (Shelby Goedeker, Kaitlynn Henning & Alex Hutchinson) as well as Coach Zollman; that’s alot of what made the loss especially difficult to swallow.  Salem will go on to face Brownstown in Thursday’s Sectional Final; but rest assured, the Lady Pirates; while returning eight starters next season, will be back in the hunt again next season.  Pirate Nation is very proud of you Lady Pirates; especially you three Seniors and Coach Zollman….words can’t express what you have meant to Lady Pirate Softball.