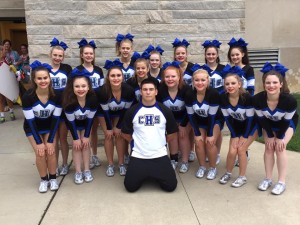 The Charlestown High School Cheer team traveled to the UCA Cheer camp held on the campus of Indiana University in Bloomington this past week.  Three Pirate seniors tried out and were selected as UCA All-American Cheerleaders, they were Bradley Lafoon, Taylor Glover and Jenna Daniel.  Additionally, Madisyn Bowser, Taylor and Bradley were three of fifteen to received a special invitation to try out to be a member of the UCA Staff, 400 cheerleaders attended the camp.  The team earned a second place honor in the extreme routine competition; CHS also got a superior trophy for their stunt sequence; and received gold ribbons during both nights of evaluations.  One of the CHS Stunt teams, consisting of Taylor Glover, Paige Cooksey, Jenna Daniel, and Sophia Adams; participated in a stunt off with over 25 other groups and finished in the top five.  Congratulations to the Charlestown HS Cheer for completing another successful summer camp.