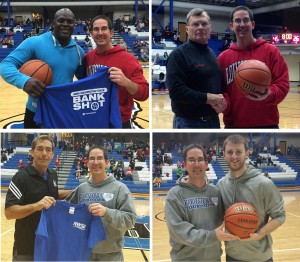 While attending Charlestown High School Pirate and Lady Pirate athletic events, don’t forget to enter for chances to win fan contests , held during the game.  Here are a few of the recent winners of the New Washington State Bank Halftime Bank Shot Shootout and the Backyard Staycation Game Ball winners.

Congratulations to these fans and thanks for playing while supporting Pirate and Lady Pirate athletics.