The Lady Pirates faced off against the Lady Dragons last night at Elk Run Golf Course. Charlestown had a total score of 254 and Silver Creek had a winning score of 216. Coach Kim Carrol stated that the week ahead will consist of putting practice, working to lower scores.

Last night the Lady Pirate golf team teed off against the Jeffersonville Red Devils and New Washington Mustangs at the Elks Club in a battle of the three Greater Clark high schools. The Lady Pirates placed second with a score of 245, losing to Jeff who finished with a score...Read More »

“We improved our team score by 12 strokes from last match. ...Read More »

Lady Pirates Top CAI and Eastern on the Links 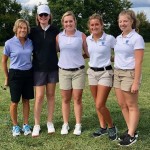 Lady Pirates Match-up with CAI on the Links 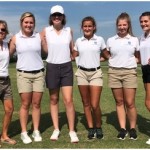 The 2017 season is officially underway with the Lady Pirate Golf team opening their season on Monday evening at Westwood Golf Course against conference opponent Scottsburg and county rival Jeffersonville. The Lady Pirates put up an impressive showing, with an overall team score of 253, finishing third behind Scottsburg, 230, and...Read More »

The Charlestown Lady Pirate Golf team competed at Champions Pointe Golf Course Tuesday evening against Henryville and Borden.  The Hornets prevailed with a team score of 205 followed by Charlestown’s 275 (Borden did not post a score).  Lexi Eblen shot well finishing with a 63; while Maddisen Smith improved her score...Read More »

The Charlestown HS Girls Golf team competed against Borden, Silver Creek, and Eastern Thursday night at Hidden Creek GC.  Silver Creek won the contest carding a team final score of 211; while Eastern carded a 237 team score; and Charlestown a 259.  Smith from Borden was the contest medalist, finishing with a...Read More »

The Charlestown Lady Pirate Girls Golf team competed in their first match of the season Monday evening, hosting Jeffersonville and Scottsburg at Elk Run Golf Course.  Coach Carroll fielded one returning golfer and has since added fiver new golfers to the program and sport.  “They were nervous, and it was...Read More »

Reminder that all athletes must have a physical on file while also passing 70% of their classes in order to be eligible for athletic participation at Charlestown High School.  All Transfer students must fill out a Transfer form in the athletic office.

The CHS girls golf team competed against Providence yesterday at Elk Run. Providence defeated CHS, but the girls are continuing to improve each match. “We are not putting together a consistent number of holes, but have a few good ones that help to improve our team score. Emma Sellers is...Read More »

The Charlestown Lady Pirate Golf team competed in their first match of the season Monday night at Westwood Golf Course in Scottsburg, Indiana. The Lady Pirates, with four new golfers to the program, and one golfer with only one year of experience, finished last of three teams on Monday night....Read More »