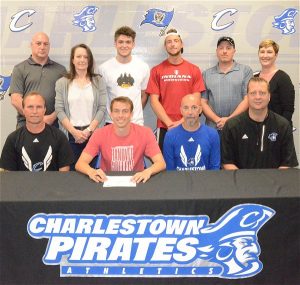 Charlestown High School Senior Track & Field standout Steven Delaney gathered with family, friends and school officials Wednesday to sign his intent to attend and run track at Hanover College.  Delaney will soon leave his high school career, but one which has continually left a mark in not only the Charlestown High School athletic recordbook, but also its academic recordbooks.  Delaney has already earn two years of college credits through Ivy Tech; but will also graduate at this year’s valedictorian.  Delaney has been the Pirate hurdle king of CHS for several years, holding the school record in both the 110m hurdle event (14.70) and the 300m hurdle event (39.38); a record he has improved on at twice during his high school career.  Delaney looks to improve on that beginning this week during the IHSAA Boys Sectional.  Delaney is the current MSC and Jeffersonville Sectional 300 meter hurdle defending Champion.

When asked what advice he would give to young runners following him who want to run in college; Delaney stated “find ways to be competitive and always work hard to never be satisfied with results”.