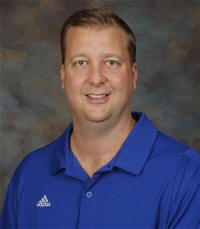 Charlestown High School Athletic Director Chad Gilbert was recently elected to the IHSAA Board of Directors Southern District Urban Seat.  As part of the Executive Committee, Gilbert will take the place of Paul Neidig who was selected to become an Assistant Commissioner of the IHSAA earlier this year. In his fifth season as the Pirates’ Athletic Director, Gilbert has pioneered the development of new coaches and created a winning atmosphere inside the Athletic Department. While speaking about his recent election win, Gilbert commented, “I look forward to serving the student athletes in our state as a member of the IHSAA Board of Directors. I hope to find being a part of this Association fulfilling and ultimately one of the highlights of my career. I want to represent our entire district in a positive way.” Gilbert will take his seat on the board at the IHSAA Executive Meeting on January 11th, 2018.