100 Year Wrap Up and White Out Hosting Salem TONIGHT 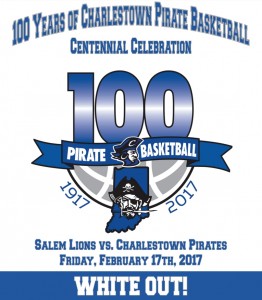 The Charlestown Pirate Basketball team will host Salem in a critical MSC Showdown tonight in the CHS Sports Arena.  The Junior Varsity game will tip at 6:00 pm with the Varsity following at approximately 7:30 pm.  The game has been designated as a “White Out” game, so come support the Pirates, sporting your white attire.

Tonight’s game versus Salem also wraps up the season long celebration of the 100th Year of Charlestown Pirate Basketball.  Copies of “Centennial Basketball”, the official book chronicling the hundred years of Pirate Basketball will be on sale at tonight’s game; while its author Chuck Ledbetter, Sr., will also be available to autograph your copy.  All copies of “Centennial Basketball” are $25.00 each, with all proceeds of book sales to benefit CHS Athletics.  Just prior to the tip of the varsity game, all former and current CHS Basketball Players will be recognized as part of the conclusion of the 100th Year of Charlestown Pirate Basketball.

During the Varsity game halftime period, CHS Athletics will honor and recognize the Jonathan Jennings and Pleasant Ridge Elementary Basketball teams and cheer squads; and the Element Elite Tumbling and Cheer teams will perform between the JV and Varsity games.

The Charlestown High School Athletic Office has announced a special ticket offer for CHS students wanting to attend Homecoming basketball games this week.  Ticket sales will be conducted at CHS Thursday during first and second lunch.

Students will have the opportunity to buy a five ($5) dollar ticket that will allow them to attend all 3 home basketball games this week.

Again, tickets will only be sold during 1st and 2nd lunches…this special will not be available at the door on any of the 3 nights. Tickets must be purchased in advance.

Don’t miss this opportunity to support CHS during homecoming.

The Charlestown High School Athletic Department would like to remind Pirate Nation of the continued events still scheduled in conjunction with the 100 Years of Pirate Basketball Celebration and some very important events upcoming during this week.

Good Luck to our Pirate Wrestlers as they compete in the MSC Conference Championships Thursday at Eastern HS starting at 6:00 pm.

Good luck to our Lady Pirate Girls Swimmers as they compete in MSC Conference Championships Thursday 1/19 at Salem Middle School starting at 6:00 pm. 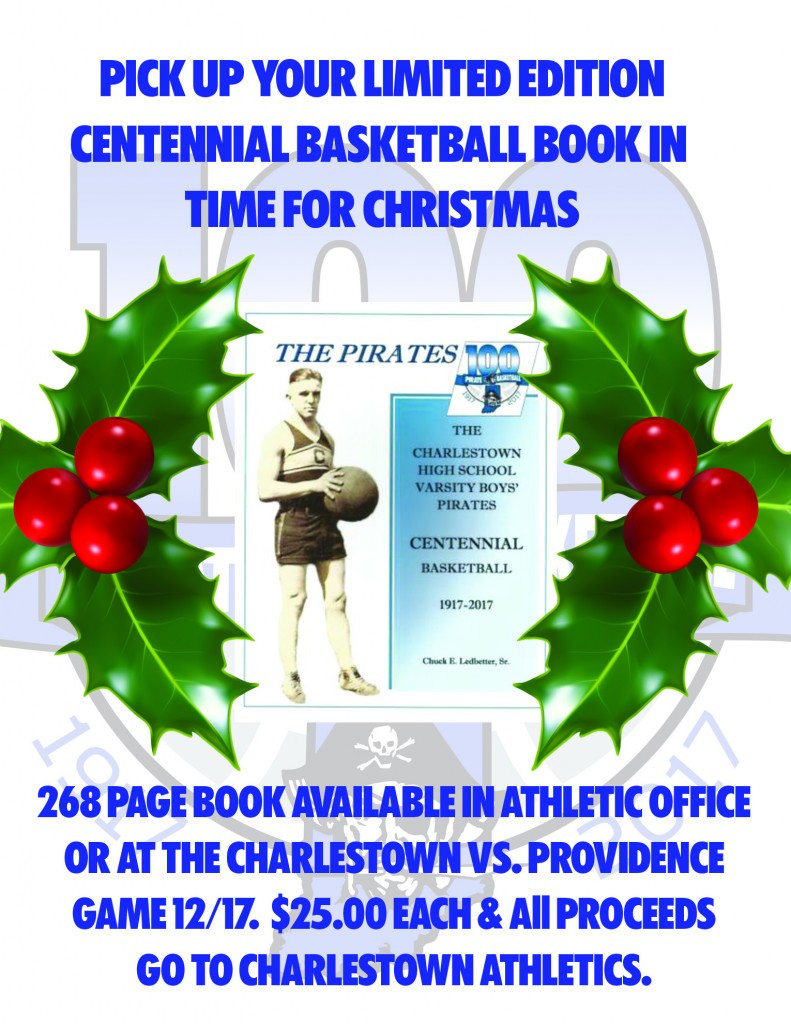 Looking for that perfect Christmas gift for a former Pirate Basketball fan or alumni player?  Consider “THE PIRATES Centennial Basketball” limited edition 268 page book that chronicles the one hundred  year history of Charlestown Pirate Basketball; celebrated this season.  This would make for a great present for the person that has everything; and loves the Pirates.

All books are $25.00 each with all proceeds of the sales to directly benefit the Charlestown High School Athletics through the Athletic Department.

Don’t miss out on a chance to own a piece of Charlestown Pirate Basketball history.

Basketball Scheduling Clarification for this Week

The following is a clarification of this week’s Pirate and Lady Pirate Basketball Schedule, it is a bit different and thus confusing.

Tonight December 14th, Charlestown will host both boys and girls Junior Varsity match-ups with Rock Creek Academy.  Both games will begin at 6:00 pm using both the Main and Auxiliary gyms at Charlestown High School.

Saturday, December 17th, the Boys Basketball team will host Providence in the CHS Sports Arena.  Junior Varsity will tip at 6:00 pm with Varsity immediately following at approximately 7:30 pm as normal.

Pirates at Generals with Teddy Toss Tonight on CPPSB

The Pirate Basketball team will travel to Clarksville tonight, Friday, December 9th for a MSC rivalry showdown against the Generals.  Charlestown Pirate Pride Sports Broadcasting will cover the game live beginning at approximately 7:15 pm at www.CPPSB.com or on the free CPPSB mobile device app.  Clarksville will also hold its annual Teddy Toss between the 3rd and 4th quarters of tonight’s game.  Bring a new teddy bear (with the tag still attached) to the game tonight, suitable for a holiday gift for a child, and get the opportunity to throw it out onto the court for a free hot dog and drink, sponsored by the Clarksville HS Athletic Department and the Clarksville Student-Athlete Advisory Committee.

Tuesday’s Pirate and Lady Pirate Varsity Basketball double-header hosting Henryville, will mark the Official kick off of the Centennial Celebration of Charlestown Basketball.  One Hundred Years ago the Charlestown High School Pirate Basketball program began competition with a November 1916 inaugural game versus the Henryville Hornets.  So fittingly, Tuesday’s home varsity double-header with Henryville will kick the Centennial Celebration into high gear.

Tuesday night’s games are historic for Pirate Nation fans, don’t miss the opportunity to be able to say you were there for the 100th anniversary game of Pirate Basketball.  Just prior to the game, the Athletic Department will be  honoring one our most distinguished, loyal and dedicated Pirates of all time Chuck Ledbetter, Sr.  Ledbetter is the Pirate Basketball historian who authored Pirates of the Hardwood, chronicling one hundred years of Charlestown Pirate Basketball.  Recently, Ledbetter completed a follow-up to the book, “The Pirates 100th – Centennial Basketball – 1917-2017” to celebrate the occasion.  The book features short essays of the best individual athletes to hit the hardwood floor for the Pirates and includes basketball stats that were not covered in “Pirates of the Hardwood.”  The follow-up book will be on sale Tuesday for $25.00 each while supplies (200 available); with all proceeds from the centennial book going to Charlestown High School’s Athletics.