Volleyball Makes it Three in a Row at South Central 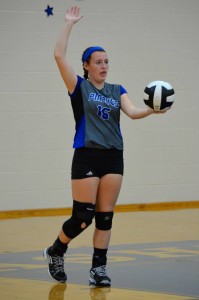 The Charlestown Lady Pirate Volleyball team capped off another busy week, making a long trip to South Central High School and defeating the Lady Rebels in four.  The win gives the Lady Pirates a three game winning streak; after also beating Borden and Rock Creek earlier in the week.  Charlestown (7-18) has won five of their last seven; as they prepare for sectional play they host in two weeks.  The Charlestown Varsity team defeated South Central 25-22, 16-25, 25-19, and 25-19 Thursday evening.  “This has been a good week for CHS volleyball.  We won all of our matches this week for a three game winning streak! We struggled some tonight with our passing and offense, but I give credit to our girls for sticking with it and how everyone had to step up at times tonight to help get the victory. In the first, set we started with a small lead, but let it slip away and let a few of their servers get on a serving run. We able to hang on and win the first set. The second set we just couldn’t get anything going. We continued to struggle passing wise and we weren’t communicating on defense. The third set we started at a 0-6 deficit before we started to play and turn things around. Hannah Vincent came in to help us with passing and defense. We were down 9-16 when Molly Braunecker gave us a great serving stretch where we scored eight points. Haley Vincent and Emalee Craven had a few serving runs to help us win the set 25-19. The fourth set we were more in control. We had a strong serving run by Emalee Craven, and Danielle Miles hit a few good line shots for kills. I’m proud of the way the girls were able to show how much they wanted the win by coming from behind to win the third set”, commented Lady Pirate Head Coach Tammy Nuxoll.  Charlestown stat leaders at South Central included Emalee Craven (9 kills), Kiersten James and Danielle Miles each contributed seven kills.  Molly Braunecker (11 assists); Bri Harvey (4 blocks); and Maddie Nuxoll and Hannah Vincent had eleven digs each.

Charlestown Volleyball (Varsity and JV) will next be in action in the New Washington Invitational Tournament on Saturday morning, October 10th.