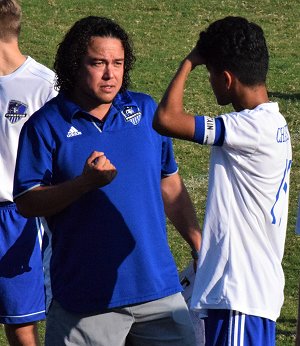 Charlestown Pirate Soccer evened their season record at 5-5 Tuesday evening after hosting the Lanesville Eagles and posting a 7-3 win.  “Today was a good win against Lanesville.  The Pirates did much better in the field.  Yes, there were a few slip-ups that cost us some goals, but my boys had a better attitude than last night.  They were more focused and played with skill. We have another home game on Thursday, so the Pirates need to rest tomorrow.  I love the effort I saw today, but we have several players dealing with minor injuries and they need time to recuperate”, summarized Pirate Head Coach Christian Martinez.  First half scoring for the Pirates included a goal by Sergio Bolanos with assist by Demetrio Ortuno; Bryson Andasol solo goal; another Sergio Bolanos goal with assist by Demetrio Ortuno; Eric Sipes with assist by Sergio Bolanos; and another solo goal by Bryson Andasol.  During the second half, the Pirates got two goals by Andrew Mattingly; both assisted by Bryson Andasol.  Pirate Goalie Matt Parrela had 6 saves and 3 allowed.  Charlestown took 20 shots, 13 on goal; while Lanesville logged 15 shots with 9 on goal.

The Pirates are next in action vs. North Harrison, in the CHS Bone Yard, as part of a huge MSC clash double header with the boys varsity playing first with then the girls varsity following.