Pirates Prime Their Offense Against the Musketeers, 61-7 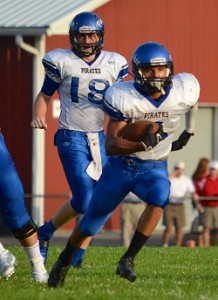 The Pirate Football team finished their 2014 regular season on the road in Pekin, versus MSC foe, Eastern High.  Charlestown compiled 546 total yards of offense, 421 of which courtesy of the ground game; compared to the host’s 119 total.  The Pirates jumped out to a 21 point lead after a 5 yard keeper by QB Tristan Chester, and touchdown runs of 41 and 21 yard runs by Antonyo Gaddie.  A Charlestown second quarter fumble set up an Eastern touchdown before  Chester hit Garrett Woods for a 21 yard touchdown reception with ten clicks remaining on the first half clock.  The Pirates got the big play machine rolling in the second half when Gaddie scored on a 58 yard run after Eastern turned the ball over on downs.  The next two Pirate drives consisted of three plays each and were both capped by touchdown runs by Syd Gieseking, pushing the score to 47-7 with 4:11 remaining in the third quarter.  The Charlestown coaching staff began inserting reserves near the end of the third, when Simon Woolridge read an Eastern pass play for a 22 yard pick six interception at the 3:04 mark.  Jarren Anderson added the Pirate’s final score with 2:42 remaining when he broke free to score on a 37 yard run to make the final score 61-7.  The Pirates finish their regular season with a 7-2 record, including 6 -1 mark in the MSC.  Gaddie rushed a game high of 176 yards on 20 carries and three touchdowns, Anderson added 81 ground yards on five rushes and a touchdown, and Gieseking two touchdowns off 75 yards in just four carries.  Tristan Chester finished the night completing 9 of 14 passes for 125 yards; and carried the ball another 62 yards on six times rushes.  Garrett Woods caught four Chester passes for 71 yards, Cameron Hopson caught three for 18 yards, and Eli Daniel caught two totaling 36 yards.  Charlestown will now focus on Sectional play, as they host Corydon (6-3) next Friday in the first round of the state tourney.