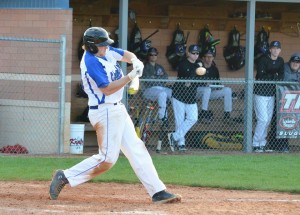 Pirate Baseball hosted the Lanesville Eagles (0-1) for their season opener Monday at Charlestown HS.  The Pirates (1-0) and pitcher Kelly Rider earned the 4-0 win, holding the Eagles to a two hit shutout while provoking six errors.  Rider also rung up eight Eagle batters in five innings on the mound.  Charlestown catcher Brett Blackford, with a scoreless game, led off the home half of the 3rd inning with a single.  After Dewey Cardwell and Zach Ramirez reached on back to back Lanesville errors to load the bases, Senior Tanner Wesp hit a two-run single to score Justin Farris, courtesy runner for Blackford, and Cardwell.  The Pirates added another run off a Wesp single in the 5th inning and scored the final run on an infield error in the 6th inning that plated Farris who once again was courtesy running for Blackford.  Wesp finished the game 3-3 from the plate, including a double and three RBI’s.  “Always exciting on opening day and I thought our guys played well, especially with the limited practice time to this point.  It’s a long season and we have a lot to improve on, but it’s always nice to get a win on opening day”, commented Head Pirate Skipper Ricky Romans.  The Pirates next host Columbus East Tuesday at 6:00 pm.