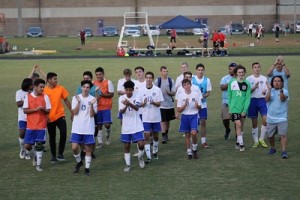 Charlestown Pirate Soccer, after trailing 2-0 at the half, defeats host Scottsburg 5-3 in the Class 2A Boys Soccer Sectional.  “We had a good comeback win against Scottsburg.  The Pirates had a horrible first half, making lots of mistakes on the midfield and defense lines and not keeping possession of the ball. We ended the 1st half with 2 goals against us. During half time, the assistant coaches, Mike and Franco, and I discussed what we could change for the 2nd half.  Luckily, it worked!  Even though Scottsburg scored 1 more goal at the beginning of the second half, we tied the game and then scored 2 more goals and ultimately won 5-3.  I’m so proud of this team and the coaching staff.  Everyone will rest tomorrow to be ready for our next game against North Harrison on Wednesday,” commented Pirate Head Coach Christian Martinez.

Charlestown’s first goal came at the 7:33 minute in the second half when Sergio Bolanos scored on an assist from Anthony Carey.  Demetrio Ortuno scored (assist by Bryson Andasol) shortly after and the rally was on.  Sergio Bolanos, assisted by Andrew Mattingly, scored twice to take the lead with just under six to remain.  Ian Flora sealed the deal for the Pirates with another goal, assist by Sergio Bolanos, with just under four remaining.  Pirate Goalie Matt Parrela had 8 saves with 3 allowed; as Charlestown had 15 shots, 13 on goal versus Scottsburg’s 14 shots, and 11 on goal.

The Pirates’ win advances them to Wednesday’s Sectional Semi-Final round versus North Harrison.  The game will begin at 5:30 pm at Scottsburg High School.  The above photo captures the team applauding Pirate fans in attendance for their support during the rally.