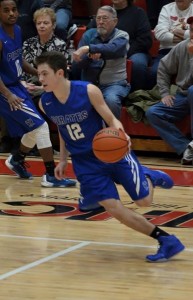 Knoebel, a 5’11” incoming Pirate Senior, who averaged over eight points per game last season for Charlestown, scoring over 200 points while shooting 43% from the field; is also a team offensive and defensive specialist, racking up 61 assists and 45 steals for the Pirates.  For more information about Jordan’s high school Pirate Stats and Pirate Basketball, go to www.PiratePride.BLUE/BoysBasketball and click on the Team Stats link.

“Jordan is well deserving of this honor.  He has put in the time and effort.  This summer he played outstanding and we are looking forward to this year”, commented Pirate Head Coach Jason Connell.