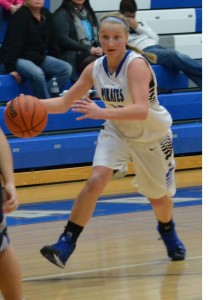 The Charlestown Lady Pirate Basketball team used their “Never Quit” mode again to make it past New Albany in non-conference play.  The host Lady Bulldogs (12-6) led the majority of the game until a Henning three point play, with 39 seconds remaining in the game, tied the score at 50.  “They never quit”, said Coach Michael Prichard.  “Kaitlynn (Henning), Lexi (Logsdon), and Justice (Burdin) played great offense, and the team dug in on defense….I’m proud of their fight” added Coach Prichard.  The Lady Pirates (15-3) outscored New Albany ten to five in the extra period to secure a good 57-52 overtime victory.  Kaitlynn Henning finished with 24 points, Lexi Logsdon added 16, and Justice Burdin 11 as the Lady Pirates got it done on the road.  Charlestown jumped out to a 12-9 start, however turnovers allowed New Albany to even the score at 15 at the end of the first.  The Lady Pirates, led by Henning’s eight, trailed the hosts 25-23 at halftime.  Charlestown had to fight back after New Albany led by as much eight in the third, using a stiff defense to force 24 turnovers.  The Lady Pirates are back in action Thursday night, for Homecoming festivities, hosting Salem.