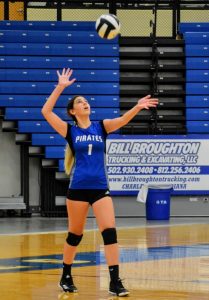 The Lady Pirate volleyball team collected another win last night at home against Madison Shawe in three sets (27-25, 25-16, and 25-7)

Coach Tammy Nuxoll had this to say about the match: “We started out strong against Shaw with strong serving from Savannah McClellan and had a 17-7 lead but got stuck in a rotation and let them score 13 points in a row. We just cannot do that against any opponent. We we able to hang on with Kayleigh Smith scored some big points at the end of the set to allow us to win 27-25. We played a little better each set and were able to put things away in the third set. Lanae’ Crowe did a nice job mixing up the sets and ended the night with 27 assists. Kayleigh Smith and Savannah McClellan had 8 kills each and Kyra Sharp had seven kills. Abbi East had a good nice passing to help the offense. Savannah McClellan had a great night serving and ended up breaking a school record with 9 aces on the night. The previous record was set in 2016 by Amelia McCoy who had 7 aces in one match. We need to increase our focus for a tough conference matchup tomorrow night against North Harrison.”