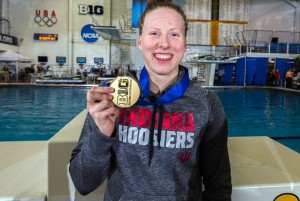 USA Swimmer Lilly King stole the show during her stunning performances in Sunday’s Olympic breaststroke events; and those who didn’t know her name….do now…….world-wide.  Not only is the 19 year old Indiana native and Indiana University student catapulting into the hearts of Americans; she represents with grace and honor…..while keeping it REAL on a world stage.  Lilly won her 100m breaststroke heat Sunday morning (1:05.78) in Rio Brazil; then swam the fastest (1:05.70) of two Semi-Final heats Sunday evening to advance to Monday evening’s Olympic Final scheduled for 9:45 pm EDT.  While watching her swim, its impossible not to root for her; then watching her interviews on National television, it impossible not to feel her pride for her country.  Its contagious; but even more so for Charlestown Pirate Nation fans, especially who know her parents from high school days.  Lilly’s connection to Pirate Nation is both of her parents; who’s mark still exist in the athletic record books of Charlestown High School.  Lilly’s parents are Mark and Ginny (Ferguson) King, both Pirates for life, and who’s ten combined school athletic records still stand today.  Ginny continues holds six Charlestown Lady Pirate Swimming records, one of which is a relay team record; while hubby Mark still holds three long distance running Pirate Track records, as well as holding the second all time fastest Pirate Cross Country time of 15:29 in 1983.  Its obvious where Lilly has gotten her athletic talents and competitive nature; which is serving her and her country well at the 2016 Summer Olympics in Rio.  The Kings live in the Evansville, Indiana; where Lilly was born and raised; and now loved by millions.  As it is obvious that her hometown of Evansville is proud of her, as well as her Bloomington college campus neighbors; but through her parents, Pirate Nation is proud of her as well.  Lilly is the perfect example of what happens when good people, do great things; even after being raised in small towns like Charlestown.  Best of luck Lilly, it’s in the air that this is only the beginning of your Olympic magic; Pirate Nation is cheering you on to GOLD!