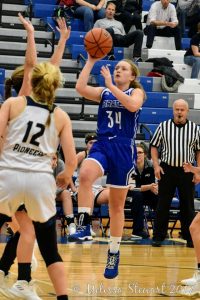 The Charlestown Lady Pirates (10-3) surged in the second half, courtesy of the charity stripe; to outlast the Providence Pioneers 40-36 and earn the program’s 19th Holiday Tourney Title.  The Lady Pirates played nip and tuck with the Pioneers (6-6) to a 17-17 tie at the break.  Charlestown surged near the end of the third to outscore Providence 13-8 before slowing things down in the fourth.  Charlestown built a five point lead with four minutes remaining, but turnovers allowed the Pioneers to fight back to within one with less than two minutes on the clock.  Providence was forced into fouling late; however solid free throw shooting by Erin Kimbrell and Samantha Matthews sealed the deal for the Lady Pirates.  Charlestown scored its final ten points of the game from the charity stripe.  Matthews finished the game a little under the weather and scoring 17 points after scoring 22 the night before against Clarksville.  Jackie Biscardi added 12 points on four treys; while Bri Harvey finished with five and Kimbrell four.

Samantha Matthews, who scored nearly 40 points during the tourney, was named the annual Butch Troutman Tourney MVP, while Bri Harvey and Jackie Biscardi were named to the all-tourney team.  “It’s a good win because a game we had to fight through and really earn it against a quality opponent,” Head Coach Scott Matthews said, “and we showed we can be resilient in tough spots and make plays to come out on the winning side.”