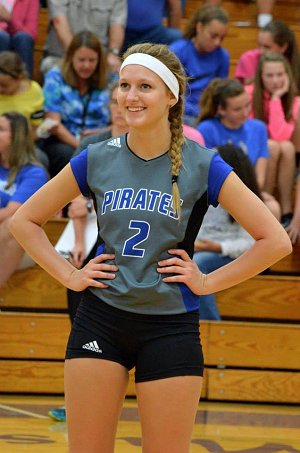 The Lady Pirate Volleyball program traveled to Lanesville Wednesday evening for a varsity and junior varsity non-conference match-up.  The Junior Varsity team improved their record to 7-4 by dispatching the Lanesville JV team in the evening opener, 25-17, 25-18.  “Our JV team continues to step up, Wednesday evening with very consistent serving tonight from Hannah Vincent, Adia Wells, Madison Christy and Kaia Reid.  We also had good leadership from our captains, Amelia McCoy and Hannah Vincent.  The strength of this team shows that the future for CHS volleyball will continue to grow and improve!”, summarized Lady Pirate Head Coach Tammy Nuxoll.

In the second game at Lanesville, the short-handed Charlestown varsity team got an important win over the Lady Eagles 25-22, 25-22, 18-25, and 25-21.  “I am super proud of our girls tonight. We have been dealing with sick players this week and tonight we were without two starters. I had to start girls in positions they were not used to and everyone stepped up to contribute to the win. We got ourselves a little behind at the end of the first set, but was able to pull out the win. We continued to battle back and forth for the next two sets and was able to win the second, but lost the third. The fourth set was a battle until the end. We played very smart at the end of the fourth set and Sidney Goedecker and Molly Braunecker made some key plays at the end of that set to get us a a few points to help push us to the win. Bri Harvey also played smart tonight by mixing up her shots and was the attack leader with ten kills and five blocks. Sidney Goedecker contributed five kills and Danielle Miles had four. Maddie Nuxoll was the assist leader with 10 and she handled some tight net passes that helped us continue play. Maddie also had four aces. Haley Vincent led in digs with thirteen while Chrissa Ledbetter had nine and Danielle Miles had six. Danielle also had a good night passing. We need to carry this momentum into our match against Salem.