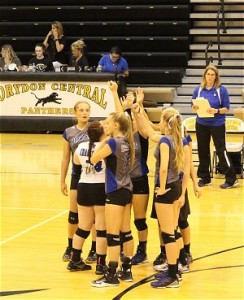 The senior laden Charlestown Lady Pirate Volleyball team opened their 2017 season Tuesday evening on the road versus MSC rival Corydon.  Charlestown defeated Corydon 3-0 last season; and had not won two in a row in over a decade….until Tuesday night.  The Lady Pirate Varsity (1-0) squad defeated Corydon (0-1) to a convincing tune of 25-10, 25-14, and 25-12; led by Coyle Chevy, Buick and GMC Player of the Game Senior Maddie Nuxoll.  Log on to www.CPPSB.com to listen to the archived broadcast of the game.  “Tonight was a good way to start the season.  It was a total team effort and everyone contributed for the win.  I (Coach Nuxoll) was pleased with the team’s focus and the way they worked together to try some new plays.  Serving was definitely a plus for us.  Our tough serving helped to keep Corydon from running a faster offense out of the middle.  I’m excited to start the season and to see what these girls can accomplish together this year”, summarized Head Coach Tammy Nuxoll.  The Charlestown offense was led by Senior Kaia Reid, who finished with 15 kills.  Senior Kiersten James, Freshman Kayleigh Smith and Senior Maddie Nuxoll each contributed 4 kills a piece.  Nuxoll also contributed 20 assists and 22 service points.  The Lady Pirate defensive posted 11 digs by Senior Chrissa Ledbetter and 10 digs from Senior Hannah Vincent.  “We will go back in the gym tomorrow to prepare for a tough Jeffersonville opponent on Thursday”, concluded Coach Nuxoll.  The Charlestown Junior Varsity squad also defeated Corydon, finishing 25-15, 25-9 to begin their season 1-0.