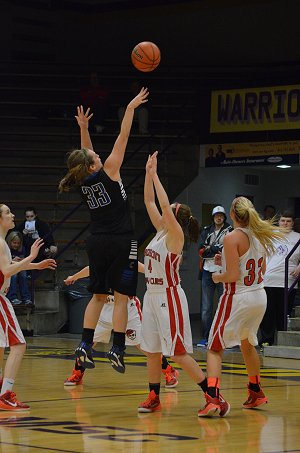 The Charlestown Lady Pirates had just faced the Lady Cubs four days earlier in their regular season finale; so how to beat Madison was fresh in their mind Tuesday evening.  Tuesday evening Charlestown and Madison girls faced off again, this time in the first round of the Class 3A Sectional #30; hosted by Scottsburg.  Tuesday night the Lady Pirates also remembered that the Lady Cubs ended their unexpected Sectional run last season, on their home court in the Sectional Final.  Enough was enough, was the theme and the Lady Pirates refused to give up.  The game plan for Madison was simple, through a zone defense at them, deny the ball inside to their scorers, make them win from the perimeter and control the momentum.  “The atmosphere of the game was great, I’m so proud of these girls, they just didn’t give up, again” commented Lady Pirate Head Coach Michael Prichard after the game.  The Lady Pirates (19-4) executed on all counts, and got a little luck at the end to finish and advance.  Meyer Gym is a historic facility, seen many a Hoosier style games, this was another one.  Charlestown and Madison played even through the first period, taking a 11-10 lead to the second.  Charlestown’s game plan developed results in the second as the Lady Pirates slowly moved ahead to take a 24-19 lead to the halftime locker room.  Charlestown opened the second half with a 5-0 spurt to quickly lead by ten.  Madison fought back, as Justice Burdin and Bethany Hall moved into foul trouble, and tied the score at 33 just as the fourth period started.  Charlestown and Madison traded a point or two lead several times for the remaining of the game.  Seniors Kaitlynn Henning and Justice Burdin were determined and unstoppable; Junior Lexi Logsdon was clutch and took care of all the little things at both ends of the court; Junior Bethany Hall wore down her opponents, and Freshman Bri Harvey played as if she had three years of varsity in her hip pocket.  Henning finished the game with 16 points, Justice Burdin 12, and Lexi Logsdon 9 as the team battled every second for the 41-40 victory.  Burdin was named the Coyle Chevy, Buick, GMC and Coyle Nissan Player of the Game by Pirate Pride Sports.  Madison (16-8) had chances in the final seconds to score points and steal the game back, but couldn’t execute.  The Lady Pirates advance to Friday’s Sectional Semi-Final game versus Salem, a familiar MSC foe Charlestown edged 52-44 on January 22nd.  Salem (10-13), upset host Scottsburg in Tuesday Sectional opening game.  Charlestown and Salem tip off at 6:00 pm Friday, and again at Charles Meyer Gym, just off Indiana 56 on the east side of Scottsburg.  If you absolutely can’t make it to the game, CPPSB will broadcast the game live beginning at 5:40 pm at www.CPPSB.com.  (photo of Justice Burdin firing a shot over Madison, courtesy of Melissa Stewart)