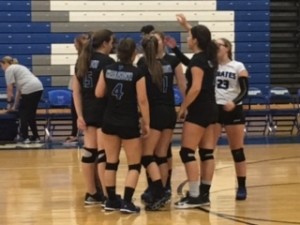 The Lady Pirate Volleyball team (7-4 & 2-3 MSC) traveled to Ramsey, Indiana Thursday evening for an important Mid-Southern Conference clash with the North Harrison Lady Cats.  The night didn’t go as planned as Charlestown fell 1-3 to the hosts, to the tune of 17-25, 29-27, 7-25, and 20-25 in the best of five set match.  “Tonight was a tough conference loss against North Harrison.  We stuck with them in the first set and were tied at 16-16 and then we just completed fell apart and let them pull way.  We started the second set the same way battling back and forth and was able to play tough until the end of the set to win 29-27. Instead of carrying the momentum over from that great win in the second set, we fell apart.  We struggled some with passing and had several hitting errors. The third set may have been our biggest loss of the season so far.  We came out slow in the final set, but was able to make it more of a match”, commented Lady Pirate Head Coach Tammy Nuxoll.  The Charlestown Offense was led by Senior Kaia Reid, who recorded 11 kills; and Sophomore Hannah Thibideau, who added another ten.  Thibideau also had five big blocks in the stat book.  Senior Chrissa Ledbetter led the defense with 15 digs and Senior Hannah Vincent was right behind her with 13 digs.  The Charlestown JV also camp up short at North Harrison in the opener, falling 0-2 (22-25 & 16-25).  “We enter a tournament this weekend with teams we have never played, so we will need to focus on our execution and what we are doing on our side of the court”, summarized Coach Nuxoll.  The Lady Pirates will play in the Crawford County Round Robin Tournament against Springs Valley (9am), Mitchell (10am) and Crawford County (11am) Saturday at Crawford County High School.  Crawford County is on Eastern Time, same as Charlestown.