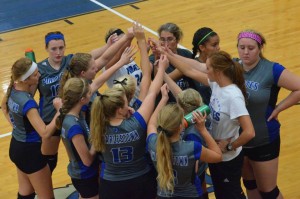 Charlestown Lady Pirate Volleyball hosted the Rock Creek Academy Lions Monday evening in the CHS Sports Arena; marking a another milestone in the programs rebuilding.  The Lady Pirates, for the first time since 2011, shut out an opponent in a best of five match.  Charlestown varsity WON 25-19, 25-18, 25-19 over Rock Creek Monday evening.  “I am proud of our girls for pulling out the match in three sets tonight.  That was our first three set win of the season.  I love how this team supports each other even we have small break downs.  Each set we were neck and neck many times being tied around 17 points and we were able to put strong serving and consistent play together to make a surge at the end of the sets to pull us a head.  We had an extremely strong showing from our senior Danielle Miles”, commented Coach Nuxoll.  Miles finished the night with eight kills on thirteen attempts and only one error for a hitting percentage of .538 and ten digs.  Emalee Craven led the kill category with twelve kills on twenty-one attempts and four errors for an attack percentage of .381.  Emalee also had a strong serving night with eight aces.  Molly Braunecker and Haley Vincent also had a strong serving night with three aces each.  Maddie Nuxoll contributed eighteen assists and Chrissa Ledbetter had a good passing night.  “This was a great team effort!  We need to continue this intensity tomorrow night when we play on senior night against Borden”, concluded Coach Nuxoll.

The Junior Varsity team won their sixth straight Monday evening, defeating their visiting Rock Creek counterparts 25-21 and 25-11.  “Our JV got off to a really rough start in the first match.  We let Rock Creek set the tempo and we were not playing our game.  The second match we got off to a great start with the serving of Amelia McCoy and we were able to play more to our ability.  We are proud of this group of young ladies, commented Coach Nuxoll.  The Junior Varsity team record now stands at 11-4 (5-2 MSC) and will also host Borden Tuesday evening in the CHS Sports Arena.