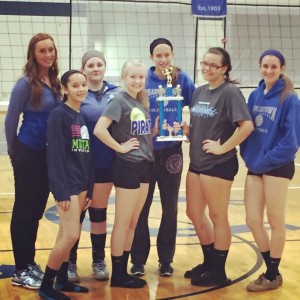 The Charlestown Junior Varsity team finished their season in a very positive way, improving their regular season record and finalizing it at 15-5; and winning Saturday’s Junior Varsity Invitational Championship trophy.

The JV team dropped their first matchup of the day versus Scottsburg 16-25, & 12-25; however then beat Clarksville 25-23, & 25-22, and host New Washington 25-20, & 25-15.  “Our JV team has had a great season!  In the tournament, they had some hard fought matches, and we are proud of all their efforts.  Even when they are down, they do not give up.  They also had some players missing today, but everyone was able to contribute to help the team win.  Kaia Reid and Amelia McCoy had a good day hitting.  Adia Wells stepped up with her passing and defense and Hannah Vincent showed positive leadership out on the court”, commented Lady Pirate Head Coach Tammy Nuxoll.

The Charlestown Varsity team, two starters short, didn’t fair as well as their Junior Varisty division; finishing the Invitational in fourth place.  Varsity lost to Scottsburg 19-25, & 18-25, lost to Clarksville 18-25, & 20-25, and lost to host New Washington 15-25, 26-24, & 11-15.  “In the first match against Scottsburg, we started off with a good lead.  We had lots of energy and were playing hard, but we had a breakdown in passing and couldn’t stop them once they had momentum. In the second match against Clarksville, we started down 2-6. After that, we allowed them to get four or five points in each rotation compared to our one or two points in a rotation. We can’t win that way. In the second set, we were playing even with Clarksville until around thirteen points. Clarksville then served five in a row to put them up 13-18. Emalee Craven went on a serving spree to put us up by one 19-18, but we couldn’t hang on and ended up losing 20-25. The last match against New Washington we fought back to win the second set to win 26-24 and were up 7-11 in the third set when we let their libero serve for 8 straight points. Due to some players being gone, we had to make several adjustments on defense and passing today, but it doesn’t matter who is on the floor, we have got to be able to put a match away when we have a lead like that. Despite the loses today, I am proud of the way that players stepped up today to play some different positions”, concluded Coach Nuxoll.  Emalee Craven had a big day with 22 kills, 9 blocks 23 digs and 3 aces.  Bri Harvey had 8 kills and 8 blocks. Sidney Goedeker had 9 kills.  Kiersten James had 8 kills and 5 blocks.  Molly Braunecker had 30 assists, and Chrissa Ledbetter had 23 digs.

Charlestown will next host their Sectional round of the state tourney beginning October 20th.  The Sectional tourney pairs will be announced Monday morning and announced on PiratePride.BLUE when made official.