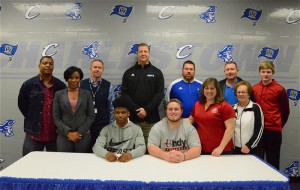 Charlestown Pirate Football Senior standouts Brendan Lawler and Shane Phillips gathered with family and Charlestown High School Administrators Wednesday to officially announce their intent to accept preferred offers from the University of Indianapolis Football program.  Indianapolis Greyhound football program has dominated their Division II athletic conference (GLIAC) over the past six years, winning it outright four times with a overall record of 30-1.  Brendan Lawler, as starting quarterback for the Pirates over the past two seasons; compiled 2,193 passing yards (including 26 touchdowns), and 1,698 rushing yards (including 19 more touchdowns) while leading the offense to a 16-5 overall record since 2015.  Shane Phillips, after two years on the Pirate Defensive Line, moved to the Offensive Line at the center position for the Pirates during his Senior season.  While in the trenches, Phillips still recorded 30 tackles (15 of those Solo Tackles), two sacks and a very memorable fumble recovery at Silver Creek in 2015.

Lawler and Phillips both commented on the academic benefits at the University of Indianapolis; including high graduation rates, internships, and job placement, as being very attractive to them….besides having a winning football program.  Lawler offered this advise to student athletes coming up behind him, “Don’t take anything for granted and cherish every moment (of high school)”.  Lawler further noted his appreciation to the support and drive of his parents, coaches, family and friends as key motivators during his high school career.

Phillips’ advice to upcoming student athletes wanting to play at the next level was:  “talk to everyone you can (get advice and guidance), use it toward personal goals.”  Phillips also obviously appreciates the family and friends support he has had during high school.

Pirate Nation congratulates “Pirates for Life” Brendan Lawler and Shane Phillips on moving forward with academic and athletic plans at the college level.  Best of luck after high school, academically and athletically.