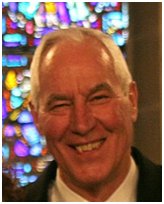 Hamilton, a graduate of Morehead State University and a giant of a man—six-feet-seven; always with a gracious smile, began his coaching career at Raceland High School in Kentucky, before coming to Charlestown. He was there for three seasons, 1964-65, 1965-66 and 1966-67, producing a remarkable 72 wins with only 22 losses with the Rams.

Coach Hamilton was the younger brother of the outstanding All-American Steve Hamilton from Morehead State University, who also was a standout at Charlestown. Hamilton played for Coach John E. Wood in 1956 and 1957. Hamilton said he had the “best” in the coaching world under his former mentor, Coach John Wood. “Wood came to Charlestown in 1955 and replaced Norton, who went back to Kentucky. Coach Wood was a really good coach and he did really well. His first year with the Pirates was also the first year in our new high school and gym. We were excited about all these events taking place in Charlestown at the time,” he said.

In his three seasons with the Pirates, Coach Hamilton won 33 and lost 31. Some of his athletes that he mentored while at Charlestown were 6’2” Danny Albertson, 6’1” Mike Bottorff, Bob Brashear, Rex Davidson, Norman Kalkhoff, 6’3” Greg Kemp, and Mike Russell. These were excellent players at Charlestown and Hamilton was mainly responsible for transforming them into solid citizens after they left high school and continued their higher education or enter into the working profession.

Who could ever forget when one of Hamilton’s exceptional athletes and great shooter, Danny Albertson poured in 45 points to break the 35 points set by outstanding ace Donnie Bush in 1962? The sparkling performance by Albertson occurred when Henryville visited the Pirates on November 21, 1969.

Charlestown has had the privilege of some of the finest coaches to ever grace the hardwood and guide young men not only in the basketball arena, but also in their careers. Coach Tom Hamilton is among one of the best. He was a winning coach in every sense of the word and ranks as one of the best at Charlestown. He was 75.

A memorial service will be held at 2:00 p.m. Sunday April 12, 2015 at Shelby Christian Church in Shelbyville with his son, Paul Hamilton speaking. Shannon Funeral Home in Shelbyville, KY is in charge of the arrangements.