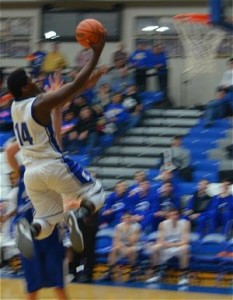 The Charlestown Pirate Basketball team opened the Jason Connell coaching era with a 69-39 win over rival New Washington Wednesday evening in the CHS Sports Arena.  The Pirates enjoyed a 44-18 halftime lead enroute to the season opener victory.  Charlestown was led by Eli Daniel’s 13 points courtesy 5 of 9 shooting plus a trey.  Junior Lex Smith 11 points, including a perfect 5 of 5 from the field.  Gage Martin and Jamal Long added nine each respectively.  “Tonight was a great night for our program.  We got off to a great start because of our defense and rebounding, which was a total team effort due to playing together.  When you have nine players score, its a great night, very proud of our effort,” commented new Pirate Head Coach Jason Connell.  The JV Pirates also started their season out on a winning note, dispatching their Mustang counterparts 56-38 in game one of the evening.  The Pirates will open MSC play hosting arch-rival Silver Creek Tuesday evening in the CHS Sports Arena.