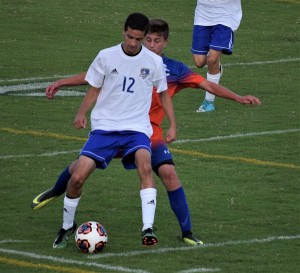 Charlestown HS Pirate Soccer moved to a record of 2-4-1 and 0-2-1 in MSC play Tuesday evening when falling to MSC rival Silver Creek 3-2 on Dutch Reis Field.  “Today, the Pirates played a hard game against Silver Creek.  We started out by not doing the right work in the field and it cost us 2 goals in the first half.  Our goalie, Matt, did an amazing job (as usual) under the goal.  Just like all games, I had a discussion with my boys at halftime.  The second half was a true turn-around”, commented Pirate coach Christian Martinez.  The Pirates executed some good plays in the second half, which led to score two goals; one by Sergio Bolanos at the 19 minute mark with an assist from Andrew Mattingly, and another by Bryce Wray at the 22 minute mark with an assist from Pascual Gonzalez.  With the score tied at two, and near the end of the game, the referee called a “hand ball” that resulted in what developed as the winning penalty kick for Silver Creek.  “I disagree with the call 100%,  but it was his call”, added Coach Martinez.  “I love the effort I saw in the second half of the game and I hope they continue to play this hard”, concluded Coach Martinez.