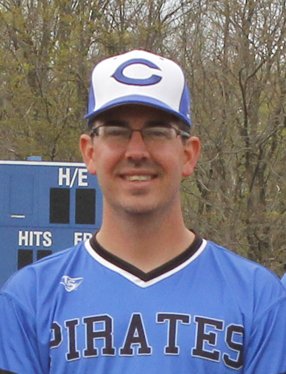 Charlestown Pirate Baseball’s Head Coach Ricky Romans is a stickler for details, and has proven time after time that its the details that take you places in the long run.  Coach Romans took the Charlestown helm in 2004, and a situation where the Pirates hadn’t won more than nine games in each of its prior four seasons.  It took Romans just one season to return the Pirates back to winning form, of which he has steadily improved on ever since.  Romans holds everyone around his program to a higher level than the local average, and its made Pirate Nation a better and highly respected local baseball hub as a result.  Romans pits the Pirates against the toughest competition around for a reason, the details.  The 11th ranked Pirates are in the midst of another successful season, Mid-Southern Conference Champions, and 16-5 record going into tonights (Wednesday) non-conference match-up versus Lanesville.  What the Lanesville game isn’t about, if you ask Coach Romans, is milestones his personal coaching record is on the brink of accomplishing.  Coach Romans will correct you with what his program’s obvious main objectives currently are this season.  Pirate Baseball Head Coach Ricky Romans, in his 12th season at Charlestown, has 198 wins and only 121 losses.  Coach Romans is obviously two wins away from a 200 win coaching milestone at Charlestown; but also one win away from passing former Coach Mike Hall as the winningest Pirate Baseball Coach in Charlestown history.  Good luck to the Pirates as they travel to Lanesville tonight, Saturday as they compete in the Benton Central Invitational, and next week versus New Albany and Sectional #30 play; but also THANK YOU COACH ROMANS for taking care of the details moving the Pirate Baseball program up and ahead of the average.