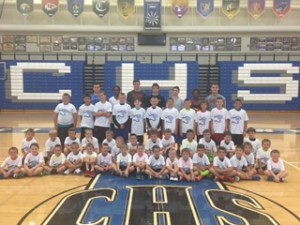 Charlestown Pirate Basketball Coach Jason Connell and his staff concluded their Pirate Summer Boys Basketball Camp this past Friday, June 19th in the CHS Sports Arena.  The camp was run Tuesday through Friday for incoming grades K-6th each day.  Instruction was managed by Pirate Head Coach Jason Connell and his coaching staff and players.  The camp attracted 50 kids who “had a lot of fun and hopefully learned a lot”, according to Pirate Head Coach Jason Connell.  Coach Connell further stated, “Thanks to everyone that came out for the Pirate Camp…the future is bright. Go Pirates!”  If more information about Pirate Basketball, go to www.PiratePride.BLUE/BoysBasketball.