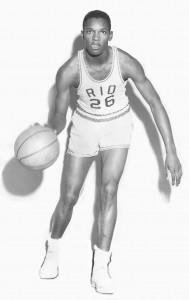 Henry Parker returns home to his alma mater, Charlestown High School, November 26, 2014, to celebrate his historical single-scoring output of 42-points that took place 60 years ago. He was the Pirates’ first hoops cager to individually score that phenomenal amount of points in a single hardwood game.
The hoops clash was at the old Jonathan Jennings Gym, January 29, 1955 on the city’s square against a highly touted high school team from Kentucky. The Louisville Flaget Braves of Head Coach Jim Huter was the victim. Parker and his fellow Pirates manhandled the Braves, 100-60!
The final score also marked another first for a Pirates’ team. The 1955 Pirates, headed by the legendary Kentucky high school coach, Letcher B. Norton, hit the century mark!
In 2017, the Charlestown High School Pirates basketball program will celebrate 100 years of hoops action, and the return of Henry Parker to his alma mater presents only the beginning of a series of special Pirate tributes to other extraordinary coaches, players and teams, and their incredible moments on the hardwood.
There will be a “Meet-and-Greet Henry Parker” in the Charlestown High School Sports Arena where fans can extend their well-wishes and share some of their own reflections of Parker’s feat on that historical night 60 years ago.
Henry Parker will be recognized before the start of the Pirates clash with cross town rival New Washington Mustangs.  Junior Varsity will tip at 6:00 pm and Varsity at approximately 7:30 pm; the game is the 2014-15 regular season opener for the Pirates…under new head coach Jason Connell.