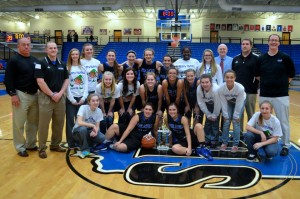 The Charlestown Lady Pirate Basketball team (18-4) will begin Class 3A Sectional #30 play Tuesday evening (February 10th), versus Madison (16-7), in Scottsburg’s Charles Meyer Gymnasium.  Charles Meyer Gymnasium is NOT located on the campus of Scottsburg High School, rather two blocks south of Indiana 56, between 4th and 5th streets, on east side of Scottsburg.  Pirate fans can easily locate Meyer Gym by traveling north on Indiana #3 to Indiana #56 and turning left (west); then four miles on Indiana #56 to Fourth Street, then left onto Fourth Street to Meyer Gym.  The Lady Pirates, averaging over 58 points per game, are scheduled to tip at approximately 7:30 pm, approximately 20 minutes after the conclusion of Salem-Scottsburg game, which tips at 6:00 pm.  Charlestown and Madison squared off last Friday in the CHS Sports Arena, when the Lady Pirates lost by only five points.  Madison is the defending Sectional Champs while Charlestown is the defending Sectional runner-up.  The Lady Pirates are 33-12 under the direction of second year Head Coach and Charlestown’s own, Michael Prichard.  All of Pirate Nation is encouraged to make the short trip to Scottsburg Tuesday evening and cheer a very talented group of Lady Pirates to another Sectional victory.  Charlestown is led by Seniors Kaitlynn Henning and Justice Burdin, both whom have scored over a thousand points each during their Lady Pirate careers.  If you absolutely can’t make it to the game, Charlestown Pirate Pride Sports Broadcasting will cover the game live over the internet at www.CPPSB.com beginning at 7:00 pm.  David Trotter, Jeremy Vincent, Chuck Ledbetter, & Jerry Doyle will have the game call.  The CPPSB game broadcast can also be heard on your smart phone or mobile device using the FREE CPPSB app available at the Apple, Google Play, or Amazon store.  For more information about the Charlestown Lady Pirate Basketball team, go to www.PiratePride.BLUE/GirlsBasketball.