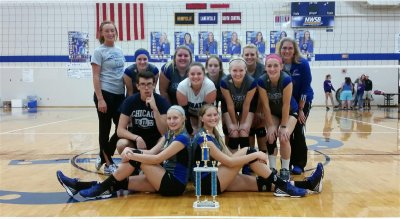 Charlestown Lady Pirate Volleyball made the short trip to New Washington Saturday to compete in the annual Mustang Invitational to close out their regular season.  The Lady Pirates sweep all three of their matches to win the tournament outright and improve their regular season record to 18-11.  Charlestown opened the tournament with a 25-14 and 25-10 sweep of Switzerland County; before a rematch of MSC foe Clarksville an hour later.  The Lady Pirates swept the Lady Generals again (as did in August’s regular season clash) to the tune of 25-10, 25-19.  The finale versus host New Washington was just as solid, shutting the Lady Mustangs out 25-16 and 25-13 to win the Invitational; the second tournament title of the season (Borden in September).  “I’m super proud of the way my team played today!  We played consistent without any major let downs, and I could not have asked for a better way to end the regular season.  Due to the fact that this was a JV and Varsity tournament we did not have subs if someone was not playing well, but each and every player stepped up to get the job done.  Our first goal of the day was to get one win to secure a winning record for the season.  Once that was under our belt, the next goal was to win the tournament.  This group of girls has a done good job of setting goals and reaching them this season”, summarized Head Coach Tammy Nuxoll.  The Lady Pirate offense was led by Emalee Craven’s 21 kills, Kaia Reid’s 19 kills, while Kiersten James added fourteen kills respectively.  Maddie Nuxoll had 50 assists on the day, and Alex Chester did a nice job stepping in to set when Maddie made digs on the back row.  The Lady Pirate defense was led by Chrissa Ledbetter, who finished the day with 20 digs; while Amelia McCoy added 18 digs.  Overall, Charlestown served very well as a team but Chrissa Ledbetter and Hannah Vincent turned up the heat with 7 aces each on the day.  “I was also very happy with our serve reception.  Ending the regular season with an 18-11 record, is a great accomplishment for our program.  The girls will get a few days off before we begin preparing for the Sectional tournament”, concluded Coach Nuxoll.  The shortly handed Charlestown JV team lost to Switzerland Co. 21-25, 21-25, Clarksville 17-25, 24-25; and New Washington 17-25, and 17-25.  The Lady Pirates will learn their sectional draw Monday morning; as the Class 3A Sectional #30 will be hosted by Brownstown October 18th through the 22nd.