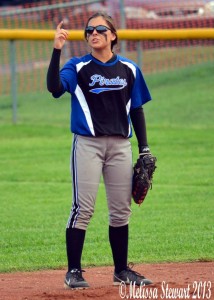 Charlestown Lady Pirate Softball improved their record to 19-4 on the season, winning their 15th consecutive game while visiting Class 2A #3 Henryville (24-4) Wednesday evening.  No let down for the Lady Pirates, coming off big victories against Jeffersonville on Monday and Salem, Tuesday evening.  Charlestown got on the board immediately when Junior Lexi Logsdon double RBI singled to plate lead off Sophomore Mackenzie Smith and Junior Leah Sherrrill.  Junior Bethany Hall followed that up with an RBI double to score Logsdon and Junior Sarah Willinger reached on an Hornet error that also scored Hall.  Charlestown lead Henryville 4-0 after one inning complete.  The Lady Pirates added two more runs by Sherrill and Logsdon off two more Hornet errors and a Hall RBI single.  Henryville got on the board in the bottom of the second, scoring two runs off a home run shot to left center; then one run in the third to make it 6-3 after three complete.  Junior Carly Price tripled to right field and then was batted in by Logsdon on a sacrifice fly in the top of the fourth; then Junior Sarah Willinger singled and scored in the fifth on a Sophomore Taylor Glover sacrifice shot between third and short.  Henryville scored three runs in the sixth, including another home run; but fell short the remainder as the Lady Pirates scored Willinger again in the top of the seventh to make it 9-6 off Glover and Senior Kaitlynn Henning singles.  The Lady Pirates denied Henryville in the bottom of the seventh, three up-three down.  Excluding the seventh, Sophomore Kendall Cline pitched the entire game for Charlestown.  Bethany Hall finished the game 3 for 4 trips at the plate, including a double and two RBIs; Lexi Logsdon singled and reached on two fielder’s choice plays; but booked three RBIs.  Charlestown will host Southwestern for a Varsity-JV double-header Thursday night then Brown County on Friday evening for Senior Night.  Retiring Head Coach Kevin Zollman will also be honored Friday evening; when all former players and coaches are encouraged to attend for the 6:00 pm first pitch.  The Lady Pirates will begin Sectional play Monday at 5:30 pm versus North Harrison at Salem High School.