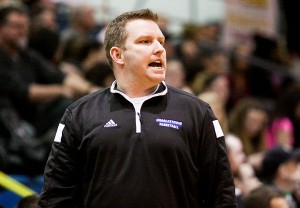 In 2016, Jason Connell is entering his seventh season as a varsity Head Coach. He began his coaching career at Clarksville High School in 2010. In his four years, he complied a 65-18 overall record, while winning two sectionals, two Mid-Southern Conference championships, one Regional Championship and two Holiday Tournament championships. Coach Connell returned to Charlestown to lead the Pirates in 2014. Coach Connell was named the News and Tribune Coach of the Year in 2012 and 2014. Coach Connell is entering his fourth season as the Pirates Head Coach, while collecting an overall record at Charlestown of 38-32 in his three seasons. Coach Connell has an overall coaching record of 103-50 in his six total completing seasons of coaching HS basketball. To contact Coach Connell, please visit www.piratepride.blue/staff.