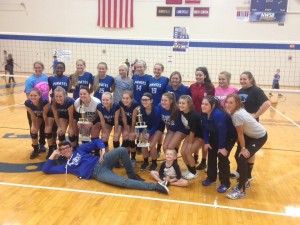 For the second consecutive year, the Charlestown Lady Pirate Volleyball team wins the New Washington Invitational.  The Lady Pirate Varsity squad swept Switzerland County (25-19, 25-11), Clarksville (25-19, 25-21), and New Washington (25-23, 25-18) to successfully repeat; while the Junior Varsity squad, for the second time in three seasons, also took first place in the New Washington Invitational.  Saturday’s three wins, improves the varsity’s regular season record to 20-9; bettering last season’s 18-11 regular season mark.  The Junior Varisty defeated host New Washington 25-6, 25-5 to earn their trophy.  “I’m super proud of the Lady Pirates today, with both the JV and Varsity bringing home tournament championships at the New Washington Invitational.  We were without one of our starting middles and had a few others not at 100% today, so I’m really proud of how everyone stepped up and contributed to the wins.  Overall, our passing was pretty solid which allowed our hitters to take good swings at the ball.  Everyone had big plays when needed to help us win matches.  This is a selfless team who has done a great job of encouraging each other and that definitely was seen today”, summarized a proud Lady Pirate Head Coach Tammy Nuxoll.  The Lady Pirates logged a very balanced offensive attack Saturday, with each hitter making big plays when needed.  Senior Kaia Reid led the team with 26 kills and five service aces; Freshman Kayleigh Smith had 22 kills; Sophomore Hannah Thibideau contributed 17 kills and four blocks; and Sophomore Korea Tutt finished with 8 kills on the day.   Senior Maddie Nuxoll helped the offense with 62 assists.  The Charlestown defense had a good day, especially during the closest set of the day, the second against New Washington, “Sidney Goedeker made some great defensive plays to help us stay in the match”, added Coach Nuxoll.  Senior Sidney ended up with 15 digs.  Senior Chrissa Ledbetter led the defense with 28 digs, Senior Molly Braunecker had 22 digs and five service aces; while Maddie Nuxoll contributed 17 digs.  Senior Hannah Vincent also had 15 digs; while Senior Sam Crace added 12 digs.  “This was a total team effort and just what we needed leading into Sectionals on Tuesday against Salem”, concluded Coach Nuxoll.  Lady Pirate Volleyball will play Salem to open Sectional play at Silver Creek, Tuesday at 7:00 pm.  The Lady Pirates deserve a big crowd making the short trip Tuesday to help cheer them on; however if you absolutely can’t make it, Pirate Pride Sports Broadcasting will cover Tuesday’s game live beginning at 6:30 pm at www.CPPSB.com. 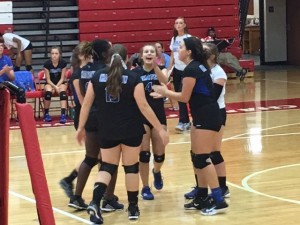 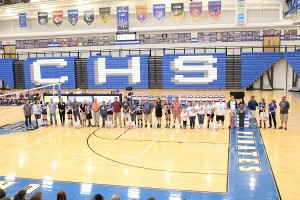 The Charlestown Lady Pirates hosted Borden Tuesday evening and celebrated its nine program Seniors.  After an emotional Senior ceremony held between the Junior Varsity and Varsity matchups, the Lady Pirates swept the visiting Lady Braves 3-0 (25-12, 25-10, 25-10); improving their season record to 16-9.  “Senior night is always an emotional night, but we played focused and in control the entire match.   All eight seniors contributed to the win, and I’m happy that they ended their last home match on a strong performance. This group has put in a lot of time and effort to improve their skills over the past four years and are great role models for younger players. They not only excel on the court, but also in the classroom”, commented Lady Pirate Head Coach Tammy Nuxoll.  Senior Kaia Reid led the offense with nine kills; while Senior Maddie Nuxoll contributed 19 assists.  Sophomore Hannah Thibideau and Senior Molly Braunecker both had a good serving night.  Hannah had 21 service points with 2 aces and Molly had 6 aces.  Senior Chrissa Ledbetter and Molly Braunecker had a good night passing, as Molly finished the contest with twelve digs.  “Although we had our last home match, we are not finished meeting the goals we set at the beginning of the year.  We will come into practice to prepare for our match Thursday against South Central”, concluded Coach Nuxoll.  The Charlestown Junior Varsity team evened their record at 8-8 with a 2-1 (25-12, 17-25, 15-11) victory over Borden in Tuesday’s opener. 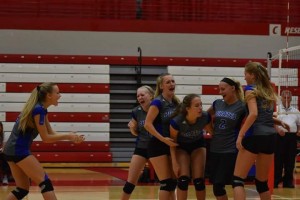 Charlestown Lady Pirate Volleyball moved to 15-9 on the season Monday evening after outlasting visiting Rock Creek 3-1 (23-25, 25-18, 25-18, and 26-24); the Lions dropped to 21-5 on the season.  “Tonight was a great match against Rock Creek with both sides leaving everything out on the floor.  I’m so proud of my team for the way they played together to pull out the win.  Each set was very close with some of the longest rallies we have had this season.  It was truly a battle back and forth for each point. Overall we had a decent night passing, and when we weren’t passing well Maddie Nuxoll, did a nice job of running down passes to put sets up for the hitters.  We had several good defensive plays by our backcourt.  In the fourth set, we found ourselves down 2-8, but everyone battled back and contributed for the win”, summarized Lady Pirate Head Coach Tammy Nuxoll.  Senior Kaia Reid led the offense with 13 kills while Senior Maddie Nuxoll contributed 33 assists and 23 digs. Senior Molly Braunecker led the defense with 31 digs.  “We look to bring the same intensity to our last home match for Senior Night, against Borden Tuesday night”, concluded Coach Nuxoll.  The Charlestown JV team battled in the opener but fell to Rock Creek 1-2 (25-22, 24-25, & 6-15). 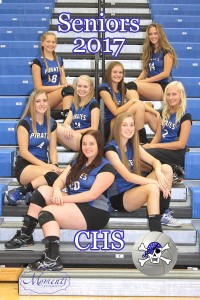 The Charlestown Lady Pirate Volleyball program will celebrate their nine Seniors Tuesday evening, in the CHS Sports Arena, between the Junior Varsity and Varsity games of their last home game hosting Borden.  The Senior Ceremony will take place shortly after 6:30 pm.  “These Seniors have been the backbone of Charlestown Volleyball.  Their commitment and determination have helped turn the program around.  These ladies are just some of the best people I know”, commented Lady Pirate Head Coach Tammy Nuxoll.  During the tenure of these now Senior ladies, with the leadership of Coach Nuxoll, have brought the Charlestown Volleyball program out of years of one or two year victories to two years of nearly twenty win seasons.  The Pirate Pride Booster Club encourages all of Pirate Nation to attend, honor, and say thank you to this very special group of ladies.  Shown in the adjacent photo left to right (bottom row):  Molly Braunecker, Chrissa Ledbetter, Sidney Goedeker, and Kiersten James.  (top row):  Maddie Nuxoll, Hannah Vincent, Sam Crace, and Kaia Reid.  Not pictured is: Senior Team Manager Sam Tetrick.  The night promises to be very emotional; as well as, prideful for all Pirate fans. 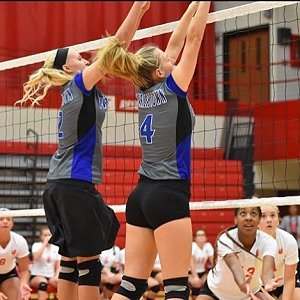 The Charlestown Lady Pirate Volleyball team improved to 14-8 & 4-4 MSC Monday evening after sweeping visiting Austin three sets to nil.  Charlestown won 25-14, 25-8, and 25-14; as the Lady Pirates started and ended strong in a three set win over conference opponent Austin.  “I was very pleased with our focus and control throughout the entire match.  We were without one of our starters, but Sam Crace and Korea Tutt did an outstanding job of stepping up.  All of our main hitters, Kaia Reid, Hannah Thibideau, Kiersten James, and Kayleigh Smith did a great job of making smart shots and finding ways to score. Maddie Nuxoll did a nice job of mixing up the sets and Hannah Vincent, Chrissa Ledbetter and Sidney Goedeker did a terrific job with passing and defense. Very proud of our play tonight and look to continue it in our conference match against Scottsburg on Thursday”, summarized Coach Tammy Nuxoll.  The Charlestown JV team was also successful versus Austin in the opener Monday evening, winning the best of three match 25-15, 24-25, and 15-13.  Listen to the varsity game broadcast by going to www.CPPSB.com and clicking on the archived broadcast schedule. 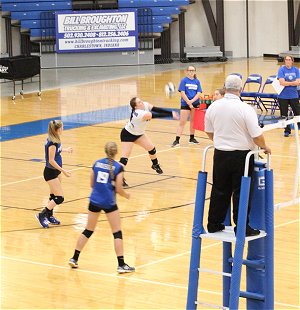 The Charlestown Lady Pirate Volleyball team (11-6 & 3-4 MSC) continued a busy week, playing for the third consecutive night in advance of Saturday’s Borden Invitational.  Thursday evening the Lady Pirates earned an important conference victory by dispatching  visiting Salem 3-0 (25-15, 25-11, & 25-23).  “Overall, I was pleased with our performance tonight against our conference opponent.  We played very well in the first two sets and played in control.  Our offense played strong, despite Salem’s good defense, and continued to wear them down”, commented Lady Pirate Head Coach Tammy Nuxoll.  During the second set, Sophomore Hannah Thibideau had a good serving run with 9 service points and Senior Kaia Reid had a ten point service run in the third set.  Charlestown allowed Salem to come back in the third set, but hung on to finish the match.  Senior Kaia Reid had a great night offensively with 15 kills; and was named the Coyle Chevy, Buick, GMC and Coyle Nissan Player of the Game by Pirate Pride Sports Broadcasting.  Senior Maddie Nuxoll contributed 28 assists and Senior Chrissa Ledbetter led the defense with 14 digs.  “I hope we can carry this momentum into our tournament this weekend at Borden”, concluded Coach Nuxoll.  The CHS Junior Varisty squad evened their record at 6-6 by dropping their contest against Salem 0-2 (17-25, & 17-25).  Follow CPPSB on Twitter for set by set updates on Lady Pirate play in Saturday’s Borden Invitational, a tourney Charlestown returns as the defending Champions.