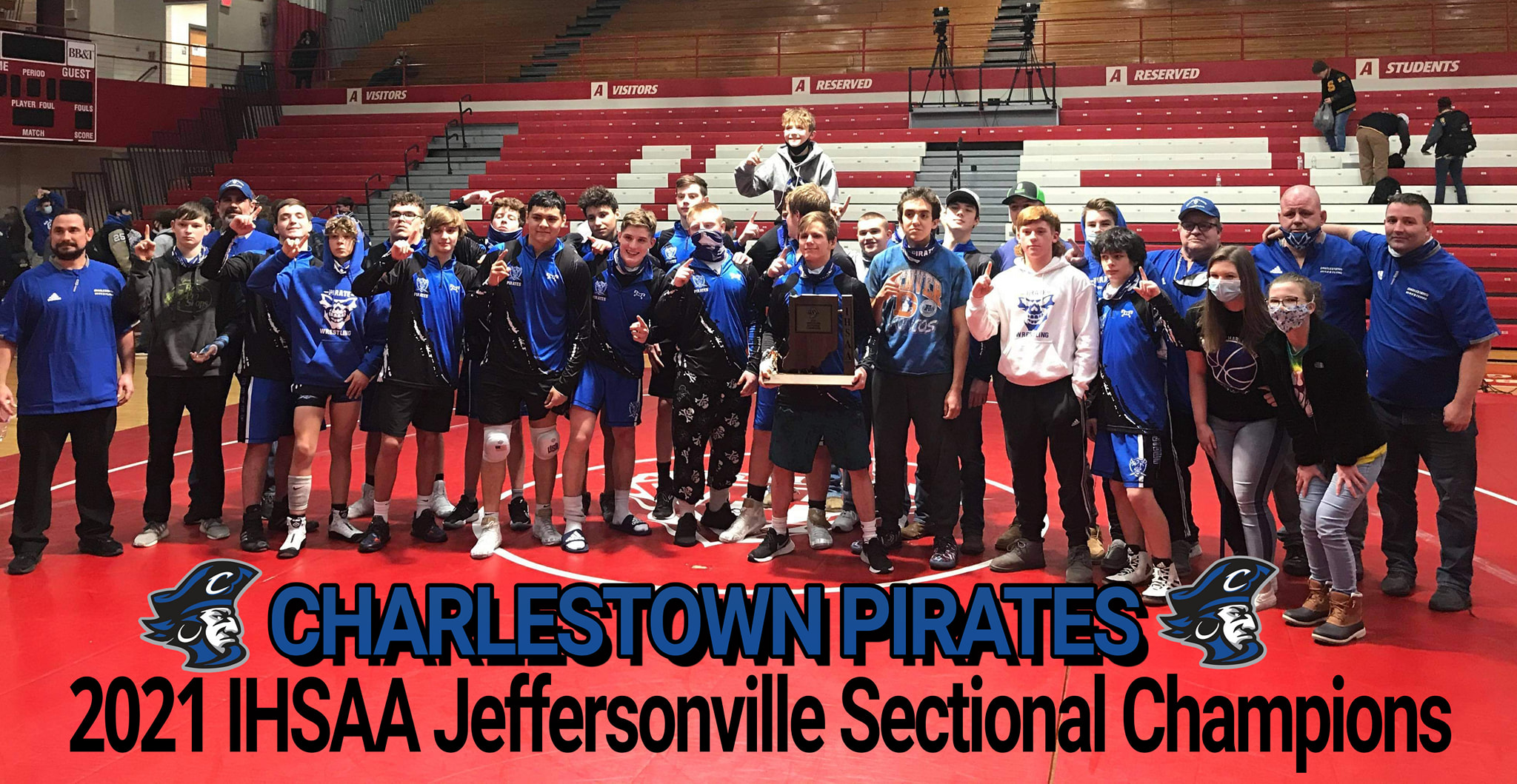 In a school year filled with ups and downs like sleds on this week’s snowy hills, the Charlestown wrestling team has had their eyes set straight on winning a sectional crown. Not rain, sleet, snow, nor COVID would stop it. Through an abundance of caution, the team has stayed safe and healthy this season and worked relentlessly, anticipating the moment the Pirates stepped on the mat at Jeffersonville High School this morning.

Early energy fueled the Pirates as they lead the pack after the first two rounds. Then the Red Devils from Jeffersonville arrived with a late surge, sending ten wrestlers to the final round, while the Pirates matted nine. With fourteen weight classes to wrestle for a sectional championship, seven of those featured a Charlestown-Jeffersonville clash, and while the Pirates only won three of those (Deke Brown–182 pounds; Manuel Ordorica–195 pounds; and Lucas Gagnon–220 pounds), the rest of the field pulled their weight to give the Pirates the victory.The Pirates watched two others step to the top of the medal stand and be crowned individual sectional champions at the 138 pound weight class (Colin Knox) and the 152 pound weight class (Ben Phillips), both of which are undefeated on the season. The pivotal match fell on Lucas Gagnon who was wrestling the 220 pound class late in the match. Gagnon edged out Jaybreon Litsey of Jeffersonville with the 2-1 decision in the third round to seal the win. Gagnon said, “Winning this title means so much to not just me but to the entire Charlestown wrestling community. I would like to personally think the coaches and teammates who helped push me and make me better so I could help contribute to this great honor.”

The victory gives the Pirates their first sectional title since 1995, and only the third in school history (with the other in 1990).  All fourteen wrestlers qualified for regional, a first in school history, as the most previously was eleven. “I am especially excited that we were able to do it for my senior teammates. This has been a goal of all 14 of us since the beginning of the season,” said junior Ben Phillips.

The Pirates are a senior laden team lead by Colin Knox who notched his 100th win and 50th pin this season, alongside Deke Brown and Manuel Ordorica who recorded their 50th pins this season. Brown told WPMQ, “This was a great win for our whole team. We’ve been working toward this goal for not only months, but years. It feels good.”

It certainly felt good for the 9th year head coach, Adam Doherty. Doherty has spent 16 years with the Charlestown wrestling program so this is his first sectional championship at the helm, but he is no stranger to wrestling championships himself. Doherty was the 103  pound state champion in 1998 and the 112 pound state champion in 1999, going 97-0 over his last two seasons. He spoke with a lot of satisfaction in his voice after the match.  “Today was a great day for CHS Wrestling. It was our goal all year, and we were focused on making it happen. Today took a whole team effort. Every kid stepped up and gave 100%. I’m very proud of each and every wrestler for doing their part in what was an awesome day, ” shared Doherty.

The Pirates will travel back to Jeffersonville next Saturday for the regional. In accordance with COVID restrictions, the IHSAA has released the following information regarding attendance for spectators:
1. All host sites will have limited to no spectators and in accordance with their local health guidelines.
2. Maintain social distancing.
3. Wear masks/face coverings at all times.
4. Only congregate with members of own household. Social distancing should be maintained between different household units.

WPMQ will provide updates throughout the day as they become available.