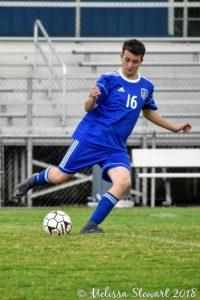 On August 28th, the Charlestown Pirates’ Boys Soccer team fell to tough opponent, Madison 3-2. The first goal for the Pirates came from Aric Hooker at 29:45, while the second goal was achieved by Bryce Wray at the 24:33 mark, assisted by Gryphon Brading. Charlestown had 16 shots with 10 on goal, while madison had 13 shots with 8 on goal. Matt Parrella had 5 saves and allowed 3.

Per Coach Martinez, “Today was a great match. We kept more possession of the ball and had many opportunities with the ball. Unfortunately, there were a few mistakes that cost us the game. The Pirates fought hard, but feel there were some plays that we could have put in goal. Overall, I am proud of the team’s performance this evening. I hope the boys take to rest up and kick butt in our first away game on Thursday.”

The Pirates’ JV team did come away with a victory over Madison, 1-0.

The team will travel to Scottsburg on Thursday for a contest set to begin at 6:00 P.M.