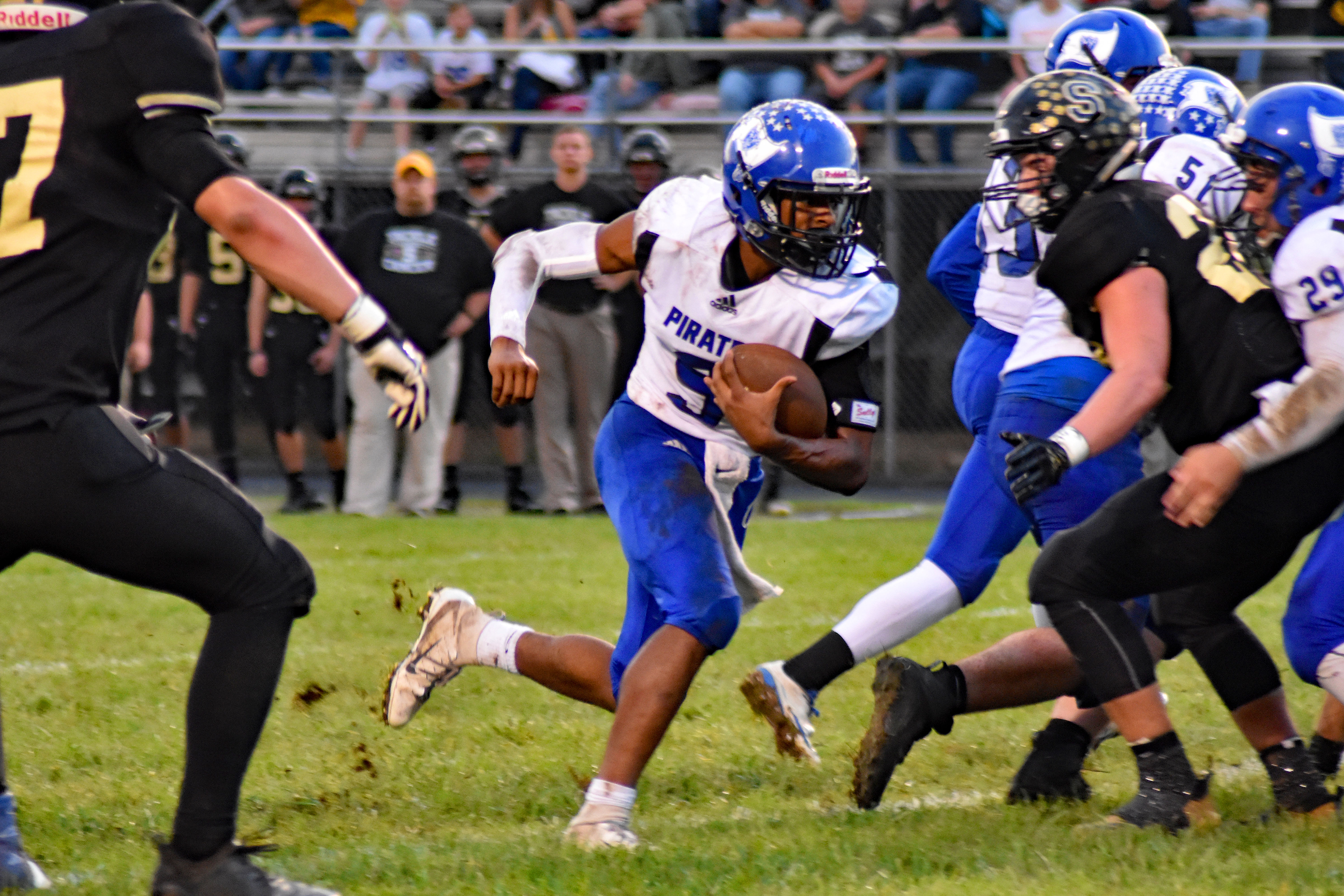 Last Friday night the Pirate football team went to the locker room with their sails a little deflated as their star running back, junior Marion Lukes, remained supine on the field in pain from a shoulder injury incurred on the last play of the first half.  The Pirates had other weapons last week that were able to step up in Lukes’ second half absence and take care of business against Corydon, and while they won 41-7, the concern about #9 and his injury weighed on their hearts.

But tonight, after a late afternoon thunderstorm rolled in to Salem and looked to dampen our spirits, the Pirates took the field with Lukes in blue and white. Concerns about the field conditions may have been on the minds of the Pirate faithful, but for Lukes and the Pirates it was business as usual. The first drive of the game gave the fans a lot of ground work to watch, which set their minds at ease about whether or not those field conditions would give the Pirates any trouble, as Lukes and Logsdon took turns with carries until Lukes eventually churned out a touchdown with 3:23 left in the first quarter.

On the second play of the second quarter, Lukes took the football 68 yards to the Lions’ end zone to put the Pirates up 14-0. Andrew Mattingly would tack on three more points for the Pirates with his first made field goal of the season at the 3:41 mark. The Lions’ next drive would end in a scoop and score by the Pirate senior Candido Martinez who was able to recover a bad snap to the Salem punter that he couldn’t control and take it to the end zone, putting the the Pirates up 24-0 with just 1:14 before the half. Lukes would head in for halftime with 143 yards on 13 carries, just 95 yards short of the single season rushing record of 1,995 yards set by Richard Lanham in 1989.

With just over six minutes to play in the 3rd and a few yards and carries later, Lukes was able to shake a couple defenders and then it was good bye, see ya later Marion Lukes and the Pirates’ single season rushing record.  The 83 yard touchdown run would give Lukes all he needed to re-write another category in the record book. This would be the second this year as he broke the single game rushing record at Clarksville, making that new record 475 yards. The Pirates would lead 30-0 before giving up a pair of touchdowns and a two-point conversion to the Lions that would make the score 30-14 with 11:35 to play in the game.

Addison Logsdon, who would finish the night with 51 yards on 11 carries, found his way to the end zone with a 10 yard touchdown run at the 3:54 mark that the Pirates hoped would seal the victory at 37-14. Then junior cornerback Brice Sweeney got his second interception of the night for the Pirates to all but guarantee the road win with 1:43.

Marion Lukes would cap off his record breaking night with 311 yards on 25 carries and 3 touchdowns for the Pirates.  His single season yardage now totals 2,306 with a regular season game remaining before the sectional as the Pirates host Eastern next Friday on senior night.