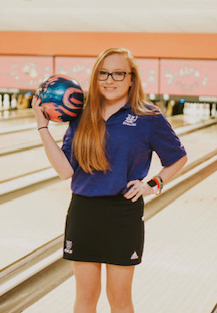 Former Charlestown Pirate bowler and 2019 graduate Whitney Goodman signed with the Kentucky Wesleyan College Bowling Team this past summer. They are a NCAA Division II team who captured the Thomas Moore Classic championship a couple weeks ago, marking the first team title for the women this season. This Sunday–February 2nd–Whitney and her Panther teammates will line the lanes in Louisville for the Morehead Classic at Executive Strike-n-Spare on Phillips Lane. The match starts at 8:00 a.m. and will probably end around 5:00 p.m.
CHS Bowling Coach Mr. Wes Wiles said, “Whitney grew a lot during her time with the CHS bowling team. She was always one of our top 5 varsity bowlers. Whitney would always work hard and compete. She dedicated time to staying after and often played in leagues and competed in tournaments. The summer before starting college, coach Corey Ingram took her under his wing, and I believe that it was his great coaching that allowed her to perform at her current level.”
Good luck, Whitney and Panthers from WPMQ. See below for a recap:
What: Morehead Classic Bowling Event
Who: CHS Alumni Whitney Goodman and Kentucky Wesleyan College Bowling team
Where: 911 Phillips Ln, Louisville, KY 40209
When: 8:00 A.M. to approximately 5:00 P.M.
Article contributed by WPMQ’s Micah Kaelin