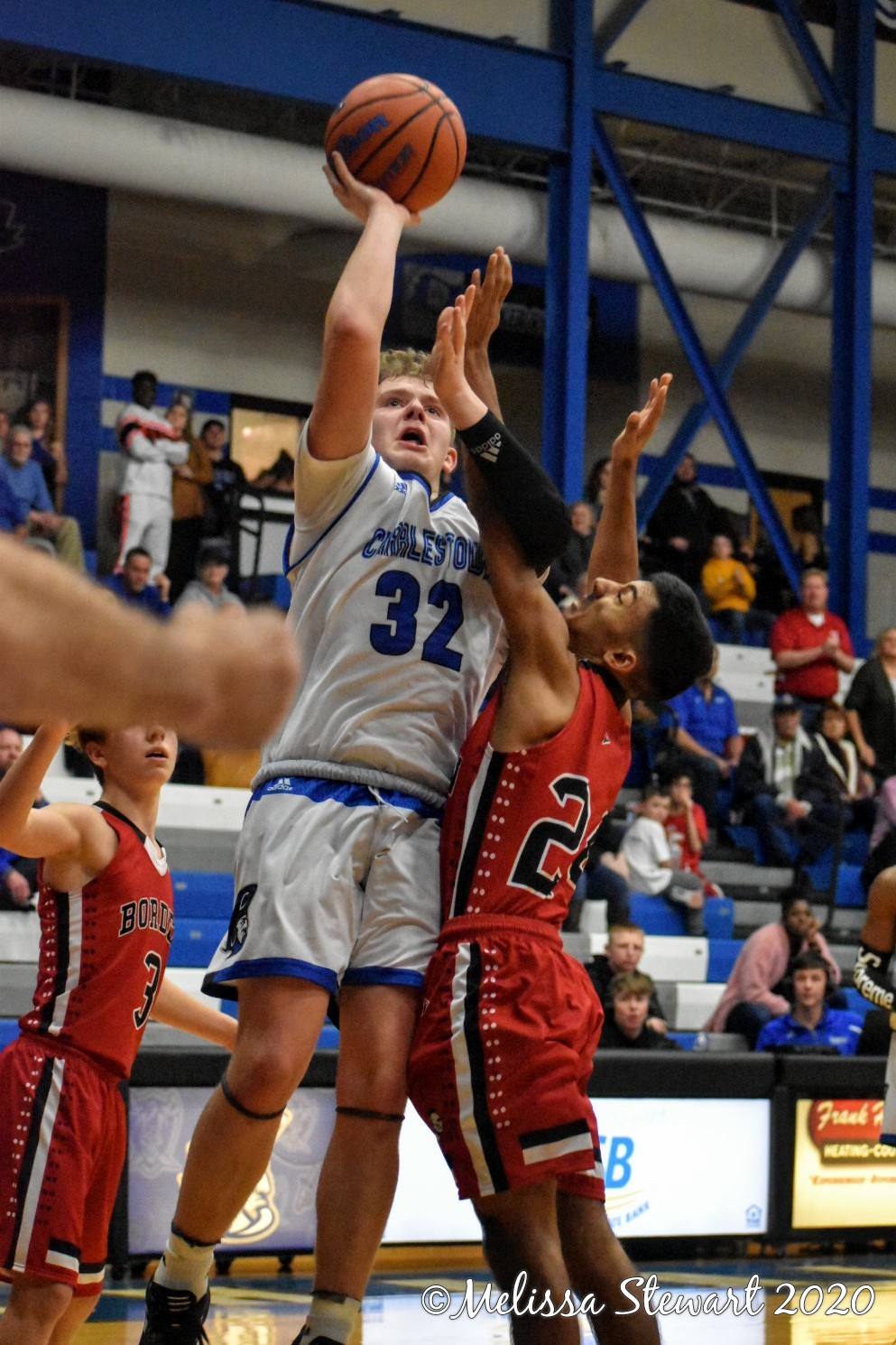 Ty Crace goes in for the shot and one to tie the game with 16.8 seconds remaining. Photo courtesy of Melissa Stewart.

Saturday night the Charlestown Pirate basketball team hosted the Borden Braves in an epic matchup on homecoming. The Pirates came into the game 1-10 while Borden was 4-8. After the first quarter the Pirates were leading 12-9, but Borden came storming into the second quarter with hot outside shooting and had captured the halftime lead over the Pirates 30-20. With persistence to just keep chipping away at that ten point deficit, the Pirates outscored Borden 14-6 heading into the 4th quarter down just two, 34-36. With time at 16.8 seconds remaining in the contest and the Pirates trailing 52-50, junior Ty Crace drove into the paint and layed in a shot picking up the foul for the and-one to knot things up at 52-52.  Crace converted on the 3-point play to give the Pirates the first lead since the end of the 1st quarter with just ticks left on the clock. Borden called a timeout before losing the ball, and the officials put 2.0 seconds on the clock. Coming out of the full timeout, Sterling Mikel inbounded the ball, then got it right back as he got in-bounds in time to get a shot off, but he missed a long three and the Pirates held on to win. “We were so lucky to win,” said Coach Sean Smith of the Pirates. When asked what he contributed the win to he replied, “We gave ourselves an opportunity. That’s been the big step in this whole thing is coming out and competing for 32 minutes and giving ourselves a chance. Tonight we had a chance and we are just so thankful to get a win.”

Crace finished the night with 19 points and was WPMQ’s Player of the Game. Devron West finished with 10, Matthew Henning and Kyle Craig added 6 apiece, Clayton Rothbauer and Caleb Brown had 5, and Ashton Davis finished with 2. For Borden, Sterling Mikel ended with 16, Tommy Devine had 14, Roberts had 8, Eurton had 6, Carter had 5, and Franklin finished scoring for the Braves with 3. Charlestown will next travel to Eastern (2-9, 0-6 MSC) on Friday, January 24th in Mid Southern Conference play in hopes of picking up a much needed road win.