Pirates Unstoppable in 56-19 Win Over Corydon 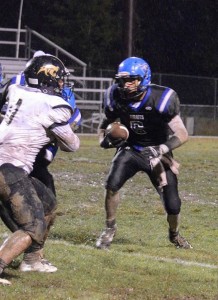 Not rain, nor gusting winds, nor ankle deep forty degree mud, nor visiting Panthers could slow the Pirates Friday night, hosting the Corydon (4-3 & 3-2 MSC) in the Bone Yard.  The Pirates racked up 458 yards of offensive Friday night, while holding the highly touted Corydon tandem of Kopp and Buck to just 235 yards of total offense.  Panther Junior RB Austin Kopp came into the contest averaging near 220 rushing yards per game, and was held to 111 yards (including a 69 yard break away touchdown run) by the Pirate Defense.

Corydon and Charlestown spent the first quarter trading two touchdown runs apiece for a 16-13 Pirate advantage after one complete.  Gaddie scored Charlestown’s first two touchdowns on scoring runs of 3 and 48 yards respectively.  The Pirates forced the Panthers to fumble the ball nine times, four of which were lost.  Charlestown (5-2 & 4-2 MSC) led 24-13 at halftime after Junior Pirate QB Brendan Lawler scamped through the mud for 28 yard touchdown score just before the break.

The Pirates opened the second half with the ball, after winning the coin toss and deferring before the start.  Junior RB Antoyno Gaddie, on the first play from scrimmage in the second half, broke free of four tackles and scored on a 66 yard carry to stretch the lead to 32-13.  Charlestown finished the night a perfect seven for seven in two point conversion attempts.  The Gaddie score seemed to break the drive of the visitors, but then another fumble gave the ball back to the Pirates when Junior QB Brendan Lawler scored on a 55 yard touchdown scramble to increase the Pirate lead to 27 with 4:59 remaining in the third.  Charlestown scored a third time in the third when Lawler hit Junior WR Garrett Woods for a 40 yard touchdown pass.  Gaddie, who finished the game with 209 rushing yards, added a ten yard rushing score with 10:37 remaining in the game; after Corydon’s Kopp broke free for a 69 yard touchdown run.  Brendan Lawler finished the game with 2 of 6 for 92 yards passing and 140 yards of rushing on 11 carries.  Simon Woolrdige led the Pirate defense with 13 tackles by games end; and was named the Coyle Chevy, Buick, GMC & Coyle Nissan Defensive Player of the Game.  Gaddie was named the Offensive Player of the Game, in the 56-19 win.

The Pirates, who had been averaging seven penalties a game, cleaned it up Friday night to just two for 32 yards.  The Pirates travel to Providence (2-5) next Friday for a none conference showdown with the Pioneers at 7:00 pm.