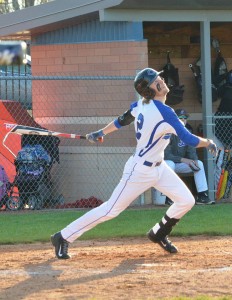 Courtesy of wet fields Friday, the annual Silver Creek Invitational got rearranged, setting up two interesting weekend match-ups for the Charlestown Pirate Baseball team.   Saturday morning the Pirates hosted the Shenandoah Raiders, a Class 2A school from around Anderson, Indiana.  The Pirates, with Zach Ramirez (1-0) on the mound; recorded the 15-0 no-hitter, shut-out, scoring early and often.  Charlestown (2-1) scored nine of their 15 runs in the bottom of the first, as the Raiders (0-1) finished the game with 4 errors.  Ramirez pitched five innings and rung up three batters, as the Pirates fielded the ball efficiently throughout the game.  Charlestown’s Zach Whitten, Thomas Hardin, Zach Ramirez, and Tanner Wesp all finished the game with a double each; Dewey Cardwell went 2 for 2 from the plate, as Wesp also added 3 RBI’s and Whitten two more.

Saturday evening the Pirates hosted Preseason Class 3A #5 Griffith Panthers in their evening contest.  Pirate Kelly Rider (2-0) pitched strong from the mound (7IP), retiring five, walking one, and allowing only two hits as Charlestown’s defense and well timed hits shut the Panthers out 2-0.  Griffith, of the northern Indiana – Hammond area, dropped to 1-2 on their early season record.  Pirate Brandon Love finished the game 1 of 2 at the plate, including a double and RBI; Zach Whitten stayed hot at the plate, finishing 2 for 2.
“Great bounce back day of baseball (after posting the Columbus East set back) for us after a couple of good practices. We got great pitching, played good defense and got timely hits all day. As I told the guys, those are recipes for winning baseball” commented Pirate Head Coach Ricky Romans.  The Pirates return to action Monday, April 4th; as the Varsity will host South Central at 6:00 pm.