Boley and Pirates Get it Done, 46-20 over Creek 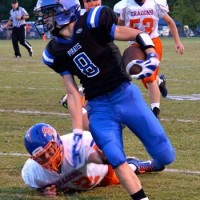 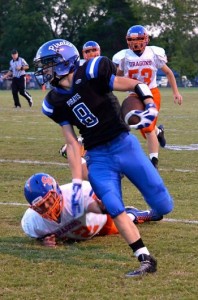 All the drama, all the hype, all for a regular season game?  If it doesn’t make sense, you’re just not familiar with Pirate Football, especially since certain coaching moves occurred earlier this year.  The game, when the final score lite up the scoreboard, had been decided by the players on the field; more so than the coaches on the sidelines, but it was fun to witness.  Charlestown threw everything, except the kitchen, at the match-up; including picking the game for the annual homecoming celebration and honoring the 25th Anniversary of the 89 Championship Pirate Football team.  Regardlessly, the game was hard fought and the most memorable to date in the short four year football series between the two schools.  The Pirates remain undefeated against the Dragons, who are definitely more competitive on the gridiron this year.  Charlestown, still resting the team’s leading rusher (Gaddie), fought off four turnovers and uncharacteristic penalties to put the Dragons away; but not until the fourth quarter.  The Pirates (4-1 & 3-1 MSC) took a 21-0 lead on 16 yard Tristan Chester pass to Cameron Hopson, a one yard quarterback keeper, and a four yard Syd Gieseking run.  Silver Creek (2-2 & 2-2 MSC) scored on two drives to trail 21-13 at the halftime break, and more fumbles and penalties killed drives for both teams throughout most of the third quarter.  Charlestown did capitalize on a Dragon fumble from their own ten late in the third, and Anderson and 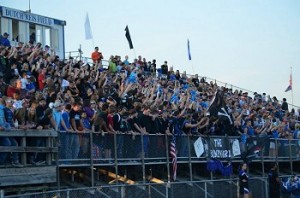 Chester combined to tack on another score.  Silver Creek answered again with a five play drive to tighten the score to 27-20; but that was it for the visitors.  Charlestown put up three more scores, starting with a Tate Boley 60 yard punt return for a touchdown with little of nine minutes remaining in the game.  Jarren Anderson run the two finals scores in, one set up by a 42 yard reception from Chester to Garrett Woods.  Anderson led the Pirates on the ground, finishing the game with 111 yards on 23 carries (2 touchdowns).  Tristan Chester finished the game 10 of 14 for 145 yards of passing (1 touchdown); and Garrett Woods added 74 receiving yards on four catches.  Eli Daniel, who was crowned Homecoming King at halftime, added 43 receiving yards on four catches and 60 rushing yards on three carries.  CPPSB named Tate Boley (Offensive) and Quinton Fetz (Defensive) the Coyle Chevy, Buick, GMS, and Coyle Nissan Players of the Game.  Congratulations to Emily Barton, who was crowned Homecoming Queen, and the community of Charlestown, backed by a fantastic Bone Yard student section, who packed Dutch Reis Field loud and proud the entire game.