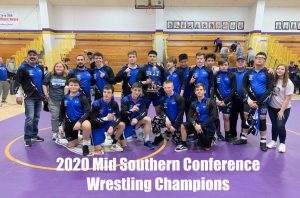 The Pirate wrestling team is on a hot streak having won the Southern Indiana Wrestling Championships (SIWC) last weekend at Southwestern then taking the Mid Southern Conference championship tournament by storm last night at Scottsburg.  With four wins, four second place finishes, two third place finishes, and a fourth place finish in the fourteen weight classes, the Pirates were able to secure a wholesome victory over the other six teams in the field. This is the wrestling program’s first Mid Southern Conference championship since 2012 and it’s the 11th overall since the tournament began in 2002. Team scores were:

Below are recaps for each of our Pirate wrestlers:

126–Alex Sheehan was the only freshman that made it to the finals where he was winning until his opponent mounted a comeback.  He finished 2nd. Teammate Ben Phillips said, “I am super proud of Alex. He has really done well his freshman season and wrestled really well tonight.”

132–Jakob Lewellen wrestled a close match against rival Mason Martin of Eastern in the finals and nearly scored a possible match winning takedown in the final minute before being taken down himself.  He finished 2nd.

138–Declan Brading wrestled a close match in the finals but ended up losing by a pin fall. He finished 2nd.

145–Brayden Moore pinned his opponent in the 3rd place match to help secure the team victory.

152–Ben Phillips had a pin in the finals against Scottsburg to become the 152 pound champion.

160–Chris Graham pinned his opponent in the final match to take 3rd place.

170–Deke Brown may have had the biggest win of the night against a Corydon opponent who had previously beaten him three times.  He went the full match and won 9-7 to earn MSC Champion honors.

182–Xuan Dong wrestled two tough matches and was winning before getting pinned.

195–Manuel Ordorica secured a fall in finals to secure the team victory.  He is also a 2020 MSC Champion.

220–Lucas Gagnon wrestled tough in the finals and came up just short of the win, still earning a 2nd place.

HWT–Austyn Wilkerson placed 4th in the final match of the evening for the Pirates.

Coach Adam Doherty said, “It was a great win for us and a total team effort.  It was back and forth most of the night and our guys came up with win after win.  They have been working hard in practice all year, and I feel like we are putting it together and wrestling our best at the end of the year.  We gave up two forfeits so we had to make up for that with bonus points and beating kids we weren’t supposed to on paper. It’s great to see these kids who have stuck with it, not quit and put in the work, to improve enjoy the success we are having.  Ben Phillips, Colin Knox, Manuel Ordorica, and Deke Brown (each conference champs) have been great leaders and have helped build the confidence and work ethic in the team. Lucas Gagnon and Jacob Lewellen wrestled their best matches of the season, losing very close matches in the finals to two very good wrestlers.  Alex Sheehan 2nd, Declan Brading 2nd, Braden Moore 3rd, Chris Graham 3rd, and Austin Ramirez-Wilkerson 4th, all put in a great effort for the team as well.

Next up for the Pirates is the Jeffersonville sectional at 9:00 A.M. on Saturday, February 1st.