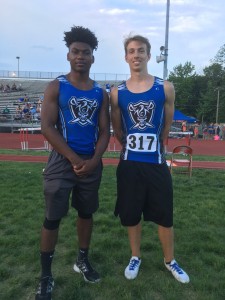 The Charlestown Pirate Track & Field team found itself among the top three teams in the Jeffersonville Sectional for the first time in many, many years; finishing third as a team (out of twelve teams) behind Jeffersonville and defending champs Silver Creek.  The Pirates were led by two Sectional Champions as Senior Brendan Lawler won the 100 meter dash and Junior Steven Delaney won both the Long Jump and 300 meter hurdle events.  Lawler also placed second in the long jump and Delaney also finished second in the 300 meter hurdle event.  Senior Luke Finchum also had a successful Sectional, finishing second in the Shot Put event with a throw of 47’9″; heading to next week’s Regional meet with both Lawler and Delaney.  Trey Woodward placed third in the 200 meter Dash and is also Regional bound with Charlestown’s 4×400 relay of Woodward, McCoy, Morrow, and Delaney.  Congratulations on a very successful track and field season…..that isn’t over yet.  The Boys Track and Field Regional meet will be held next Thursday, May 25th at Bloomington North High School.