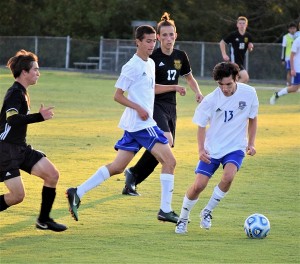 The Pirate Soccer team improved to 3-4 and 1-2- in MSC play Thursday evening after hosting conference rival Salem and capturing a 3-1 win.  “The Pirates concentrated and played a lot better on the field.  They used their bodies to get possession of the ball, which led us to victory.  We still have some work to do when it comes to keeping our focus, but the boys will have the weekend to rest before getting back to it”, summarized Pirate Head Coach Christian Martinez.  Charlestown’s first goal took place at the 11th minute in the first half when Bryce Wray assisted Andrew Mattingly.  Anthony Carey brought the score to 2-1 before halftime and in the 34th minute with the assist going to Andrew Mattingly.  In the second half, Pirate Bryson Andasol at the 20 minute mark scored on a penalty kick and sealed the win for Charlestown with a 3-1 victory over Salem.  Matt Parrella had 3 saves and allowed only one.  Charlestown finished with 15 shots, 7 on goal; while Salem recorded 8 shots, and 4 on goal.  Charlestown will travel to Austin next Tuesday for more conference competition.