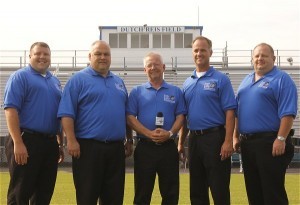 The Charlestown Pirate Pride Sports Broadcasting project started in 2008 with a mission of giving something back to the players, team, school & community; by highlighting the hard work of our CHS student athletes.  The project was NEVER intended to compete with any of the very sports programs it supported.  That being said, the relationship between the CPPSB football broadcast crew and the HS coaching staff has reached a point that is no longer compatible.  The coaching staff is convinced that CPPSB’s coverage is to “negative”; of which we (the broadcasters) strongly disagree.  For ten years we have promised to keep “it real”, with “it” being the broadcasting product we produce voluntarily.  Hundreds of weekly listeners have voiced approval and a dozen of our sponsors have concurred; most for the majority of our ten years.

Pirate Nation, we love you, we have deeply appreciated your support over the past decade and sincerely apologize for any interruptions; however CPPSB has decided to not broadcast this week’s Clarksville game while we continue to evaluate the compatibility problems eluded to above.

Once all factors have been properly evaluated by CPPSB; including impacts on supporters, arrangements with sponsors, and effects on our student athletes, an announcement will be made on the remainder of the season’s football broadcast schedule.  The coverage of Lady Pirate Volleyball will continue as planned; and will not be affected.